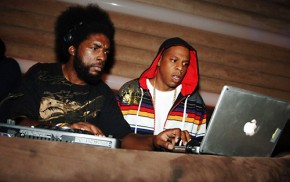 Questlove – (drummer for hip-hop/neo soul band  The Roots)  has revealed that he and rapper  Jay-Z have a secret project in the works, the details of which will be revealed in the upcoming weeks.

“Basically, Jay’s a friend. I went there and it was hectic. He and I are actually working on a secret project, so I was kind of taking a break from working with him and he was just like, ‘Come by the opening.’ So I came. So we’re doing something real big in the next few weeks”