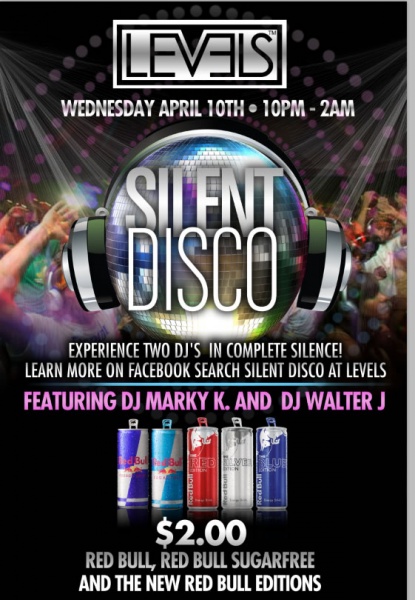 The last of Red Bull’s Penn State spring semester EDM events is poised to take place tomorrow night at Levels. DJ Marky K will be facing off against DJ Walter J in a silent disco. If you made it out to the event last year you can be certain that you’ll have a good time, and if you’ve never been to a silent disco than this is definitely not an experience you want to miss out on.

The entire building will be silent except for the sounds of Marky K or Walter J blasting through your headphones, which each guest will receive upon entry. Each pair of headphones will have two channels so you can switch back and forth between each DJ as you groove out and decide who to vote for.

Invite your friends for a chance to win a FREE case of RedBull and tickets to the Boombox Festival After Party at Levels.”

Come out, drink some Red Bull and dance with a stranger to two different songs!

We couldn’t find any coverage from the event last year, but here is a video from another recent Red Bull Silent Disco to get you pumped!