DETAILS FOR Sean Lives On Benefit Concert with Kap-Slap and Limitless Entertainment!

Sean Lives On Benefit Concert with Kap-Slap and Limitless Entertainment!

Eric Poluhovich
Events
Comments Off on Sean Lives On Benefit Concert with Kap-Slap and Limitless Entertainment! 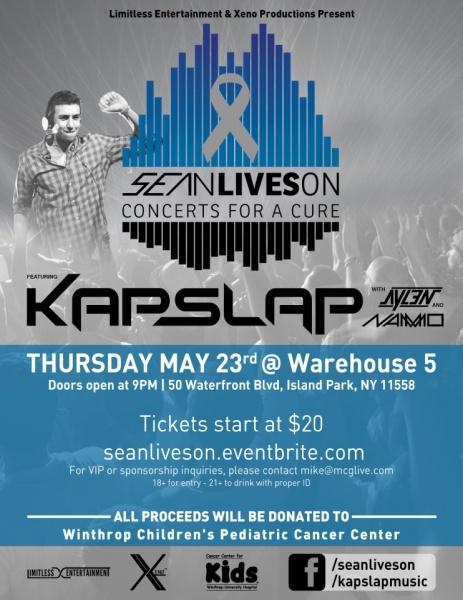 State College entertainment company Limitless Entertainment, in conjunction with Xeno Productions, will be hosting an event called Sean Lives On, featuring Kap-Slap and Nammo! It will be taking place on May 23, 2013 at Warehouse5 in Island Park, Long Island, NY. 100% of the proceeds from the event are being donated to Winthrop Children’s Hospital in Mineola, NY.

This is the second annual Sean Lives On event. Sean Lives On was founded by Zach Kardish in 2012, in memory of his friend Sean Riley, who passed away in high school from cancer. Zach was very grateful to the incredible staff at Winthrop Children’s Hopsital, and wanted to help them out. He created Sean Lives On, and is now hosting annual concerts to raise money to benefit the hospital. Last year’s event raised over $10,000, and this year’s event, now with Limitless Entertainment and Xeno Productions involved, is expected to raise over $20,000!

The show is being headlined by DJ/producer Kap-Slap. Kap-Slap is blowing up right now, as he recently headlined venues such as Marquee Las Vegas and Webster Hall in NYC, and is receiving acclaim for his recent remix of Clarity by Zedd. He even got some recognition from Zedd himself! His mix “30k mix” just recently dropped, so check that out too! Last year’s headliner, Nammo, will also be performing. He himself is a cancer survivor, and said that the show last year was “undoubtedly the most powerful show I’ve ever been a part of.”

Make sure you come out to this awesome event for a good time and for a good cause. Help Sean’s legacy live on to help others in need!

The event is 16+, and alcohol is available to those who are 21+. Tickets start at $20. Again, 100% of proceeds will go to benefit Winthrop Children’s Hospital. Check out the event page here, the Sean Lives On Facebook page here, buy tickets here, and check out Limitless Entertainment and Xeno Productions.