This past Tuesday, Bo Burnham was back in State college for the third time in four years. For those of you who don’t know who Bo Burnham is, he’s a very talented comedian who originally rose to fame by posting videos online to his YouTube channel of clever songs he had written. Bo has come a long way from his tiny bedroom, and his comedy now includes more than just well-written songs (though music is still a big part of his act). So let’s recap the night.

Starting off the night was comedian Adam Newman. Though his set was only about 10 minutes long, he made every minute count. Right when he walked on stage, he involved the front row of the audience by commenting on how close they were to the stage, and making one girl feel awkward as she tried to get into her seat. Though some of his jokes were comical just because of how ridiculous they were, like putting burritos into t-shirt guns, others were very relate-able, like desperately searching for answers to diagnose oneself using WebMD and Yahoo Answers. And of course, through out his set, there were lots of poop and diarrhea jokes. Newman even recorded this Vine video live during his set, with the audience helping him out. Adam used his time effectively, and he didn’t take himself too seriously, which made the act that much better. Adam is up and coming, so make sure you follow him on Twitter and see where he goes from here.

After the short introduction, Bo Burnham came out full force and set the night in motion with his special “what.” Music was prevalent through out the entire act, ranging from pre-recorded tracks that could change at any second, to short songs featuring Bo and his piano (which could also change at any second). And that seemed to be one of the major themes of the night, and one of the major aspects of Bo’s comedy: you never know what’s coming next. Whether it’s him gearing up to play a song which only ends up being 3 seconds long, segues that really aren’t segues at all, or jokes that take a dark turn very quickly, you never know where the show is going to go. The crowd was involved in the show as well. He had an unscripted discussion with a member of the audience who was leaving the show to go to a THON meeting, which felt like pulling teeth at times when the two kept misunderstanding each other. But in the end, everything was figured out, and the audience explained what THON was to Bo (and he’s apparently a THON supporter!)

But despite pushing his stand up routine “what.”, Burnham made sure to perform some old favorite jokes and songs to make the crowd happy. Everyone cheered when he played the opening notes to “love is…” and “oh bo.” Bo played songs, read poetry, and told typical stand up jokes, for a well-rounded and diverse show that the sold-out crowd all seemed to love.

Bo often acted very serious, performing under a persona he seems to have created for his live shows. Sometimes, his seriousness would be funny, and others it would be dark and only comical because of the fact that it was not funny, but uncomfortable. He’s very well spoken, and a lot of his humor is based on scientific or historic concepts, wordplay, or twists on typical ideas and idioms. His comedy is smart, serious, and articulately written into a blend that is entirely his own and constantly keeps us guessing about where it will go next. He’s talented in a number of ways and aspects of comedy, and will definitely go far. Make sure you check Bo Burnham out on Twitter, and also watch his Vine videos because they’re extremely entertaining. For more reviews of upcoming shows, make sure you check back to State In The Real! 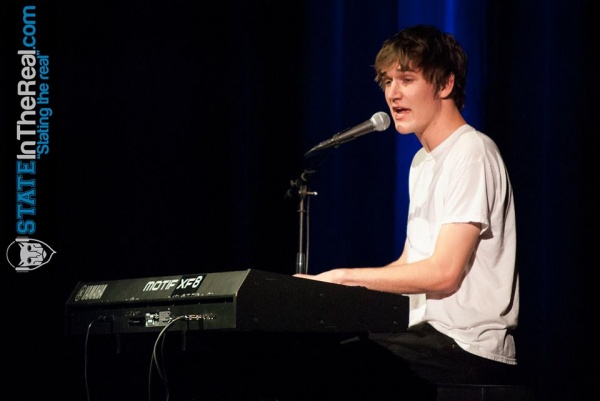