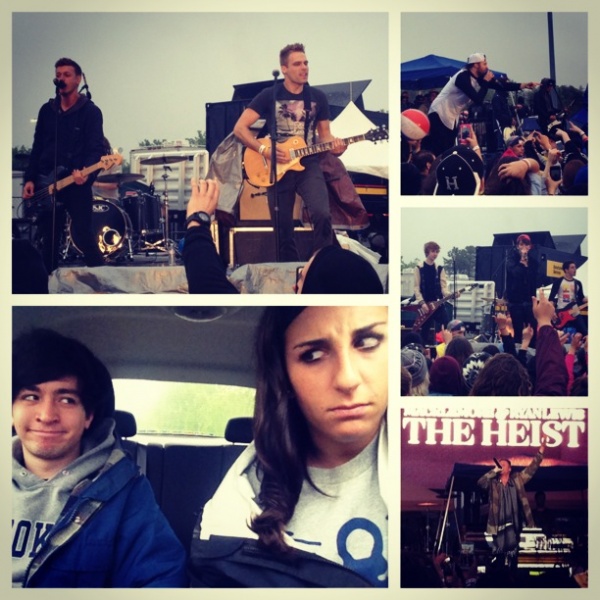 So I woke up Sunday morning with high hopes for Skate and Surf to accommodate the serious issues of yesterday, especially because Sunday’s forecast was also rain, rain and a chance of more rain.

After spending the entire day in the rain Saturday in only a tank top (I CHECKED THE WEATHER BEFORE I LEFT AND THE CHANCE OF RAIN WAS AT 10%, LIES), I opted out in arriving a little later to Skate and Surf. I also just wanted to avoid sitting in my car for hours on end trying to park again. I put on my sooooo pop-punk windbreaker, picked up my friend Johnny (pictured with me in the bottom left hand corner of picstitch!) and headed to the park for Skate and Surf round two around 4:30 p.m.

Upon arrival at the park for day two I was let down in seeing that nothing changed. It was still chaotic. It was still wet. And the main stage was still running late. But nonetheless, Johnny and I arrived just as another hometown favorite, Saves The Day, was hitting the stage. The large crowd seemed to have loved every second of Saves The Day’s set.  The one song I and what seemed like most of the crowd was also looking forward to most from them, “At The Funeral” got cut because of their late start, which was a real bummer.

Johnny and I then wondered over to the Ford Fusion and Ford Focus stages where we managed to stay for a good portion of the day.

MOD SUN took the Ford Focus stage first and I was really surprised by his performance. I had passed MOD SUN’s set numerous times at this past year’s Warped Tour but never stopped to watch. MOD SUN is your modern day Hippie gone rapper? I’m still not sure why he kept saying to the crowd that he wanted to turn Skate and Surf into Woodstock…but I digress. Regardless, he emphasized on calling his crowd not fans but friends, and putting the peace sign up with the beat. He also blew both Johnny’s and my mind when he revealed that MOD SUN is in fact an acronym for Movement On Dreams Stand Under None…deep right?

Switching to the Ford Fusion stage, Youtube–Cover-Band-Who-Apparently-Has-Their-Own-Music -Now Hollywood Ending (pictured middle right hand side of picstitch) were ready to party with the crowd. These precious little cherubs came out on stage and it was no wonder that their entire crowd was all girls, except Johnny….and this dancing boy in a Taking Back Sunday shirt. Their songs were super pop and even played their cover of Justin Bieber’s “Beauty and The Beat”. All in all, they were a change of pace for the festival and it was fun to watch them.  But have no fear, Skate and Surf made sure the young pop band got to witness their first ever circle pit, so there’s that.

Next, back on the Ford Focus stage was Breathe Carolina (pictured top right hand corner of picstitch). If you attended Breathe Carolina’s show at Penn State in Fall 2011(Thanks SPA!) you already know Breathe Carolina likes to rage. In fact, I think rage would be an understatement for these guys.  Watching their set was like attending Project X in real life. Bottles were popped. The beat dropped. Members of Breathe Carolina walked on the crowd.  It was cray. But don’t worry, WE WON’T BLACK OUT.

Finally, one of my most anticipated bands on the entire line-up was up. Cartel (pictured top left hand corner of picstitch) is one of my absolute favorite bands and their album Chroma is easily one of my favorite albums of all time. Considering how many shows I go to, it’s weird for me to admit I had never gotten the chance to see them live. However, Skate and Surf was finally my chance.  I made sure to be up close for their set as the crowd grew larger and larger. It actually surprised me that they were on a side stage considering the size of the crowd that came to watch. Opening with Chroma hits “Say Anything (Else)” and “Honestly”, their set lived up to so many expectations for me and beyond. Will Pugh’s voice is so incredible and sounds the same, if not better live than it does on their records. They played a nice mix of old and new favorites, which really captivated the crowd.

Following Cartel, Johnny and I walked over to the main stage as Macklemore and Ryan Lewis (pictured bottom right hand corner of picstitch) were gearing up. The massive crowd stretched almost to the merch tent in the middle of the festival grounds. I’m not much of a rap person but when it comes to Macklemore and his album The Heist in particular, I can’t stop listening. You could consider his music my guilty pleasure and he was another one of the artists I couldn’t wait to see live. His set was more of a show than anything else. While only really playing four or five songs, he interacted with the crowd on a completely different level, bringing up fans on stage for wearing a bear costume, and walking out on the crowds hands. Right before he performed “Same Love”(which is one of the most beautiful songs out right now), Macklemore gave an inspiring speech to the crowd of teens and young adults. He explained how our generation is in a pivotal point in the rights for equality for all and how important it is to make our voices heard. After he ended his song, he asked the entire crowd if you are in favor of equality for all to raise a single finger. Almost every single person in the crowd had their index finger in the air and chills ran up and down my spine. It was moments like that which made Skate and Surf, although hectic and unorganized, also awesome and inspiring.

Closer of the night, A Day To Remember, took over the main stage to end not only the night but the festival as well. In the end, Skate and Surf 2013 was put to rest, and maybe for the better. While some things were out of the festival’s control, changes could have been made to accommodate both the bands and the attendees but they weren’t and I think that’s what let me down most.  Many, including myself, left the festival looking at the glass half empty. We all got to see some of our favorite artists, but not the way we had hoped. I truly hope that if Skate and Surf returns next year, they take into account the feedback they get now that the weekend is all said and done.