Something New Spinning Your Way

Eric Dowling
Mainstream Music, Music
Comments Off on Something New Spinning Your Way 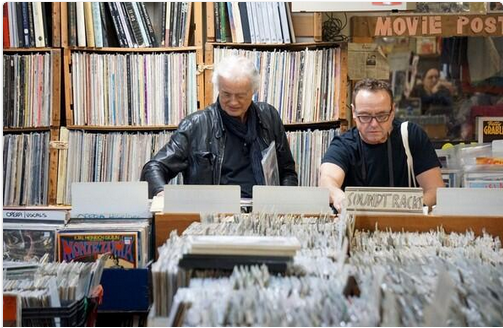 About five years ago, most people were jamming out to their favorite albums on their iPods, or maybe even a Zune or two. Before that we had CDs or cassettes, before that was Eight-tracks, and before that was vinyl, the king of music listening. As most of your parents will lament to you, the music scene has changed, artists no longer care about making an album and just care about a single. But in the last three years (give or take), vinyl has exploded back on the scene. Whether it be from the surge of the hipster scene, the pure music quality of vinyl or just the fact that it is so cool to put a needle on a record and let it play out. Vinyl is making a comeback into the music scene, and artists are taking note, releasing vinyl exclusive versions of albums adding some extra art to their records.

For me, vinyl has always been something that confused me, the technology seemed so complicated and advanced for something that has been around for so long. When I walked into my first record store (like true record store, not Urban Outfitters, etc.) and flipped through the records I was amazed at how many new artists were releasing on vinyl, and it wasn’t just rock and alternative artists, but also rappers like A$AP Rocky and Kendrick Lamar. I bought two records that day, The Black Keys Rubber Factory, on a printed vinyl, and Kanye West’s legendary My Beautiful Dark Twisted Fantasy. I was hooked, no sooner after buying those records I was in the hunt for a record player. Finding one that met all of my needs was crucial, I wanted to be able to convert to MP3 with my turntable, so I could enjoy the scratches and pops on the road. Once I found one, courtesy of Third Man Records, I was ready to start a collection of my own.

Now I have a nice little collection, which is growing at alarming rates, I hope one day to share my collection my children so they too can know the joys of vinyl. The coolest part of getting into vinyl was inheriting a collection from my parents. They had all the great records of the 80s, from Rock to Pop. They had Dire Straits, Prince, and even The Last Waltz to name a few. But I just loved listening to these records the way that they were meant to be listened to, in a room all the way through. That being said, the team here at State In the Real has decided that vinyl records need their own spotlight, much like album reviews, we will be dissecting our vinyl collection. In our new weekly column; “The Sunday Spin”.

DFA Founder, James Murphy, Loves Vinyl Records, so You Should Too

In “The Sunday Spin” we will talk about one record each week; what it means to us, how we came in possession of it, and where we got it (we got to show love to the Mom and Pop Record Stores). Listening to RECORDS is just an experience, and there are not a whole lot of places that you can talk about vinyl and how much it means to you, so we are starting this column to give an outlet for all those vinyl-heads out there. So stay tuned, because this Sunday we will be releasing our first article for “The Sunday Spin.” If you have a record that you want to talk about, share with us on Facebook, Twitter, or comment on our website . We love stories about music so comment away, and remember “Keep On Spinning.”