DETAILS FOR SPA Noontime Presents: Dinner And A Suit!

Misun Lee
Events
Comments Off on SPA Noontime Presents: Dinner And A Suit! 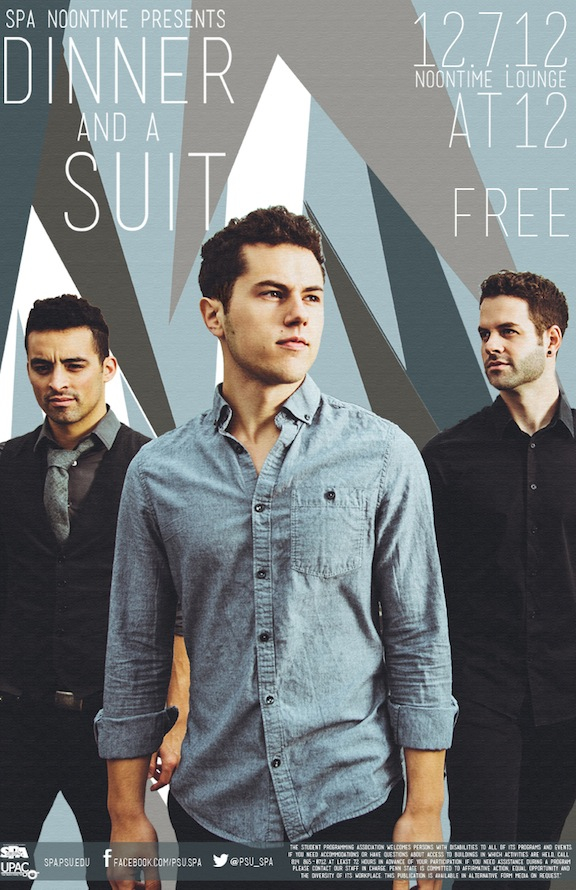 Come grab a bite, or just hang out in the HUB-Robeson Center and listen to SPA’s Noontime show, Dinner And A Suit!

In a music world where genre lines are increasingly blurred, Dinner And A Suit has emerged with a sonic meld that resonates with familiarity, and captivates with distinction.

Formed in New Jersey by cousins Jonathan Capeci, Joey Beretta and Anthony Genca, the trio is forging a path that reflects the band’s music itself: putting the right pieces in the right places at all the right times.

Since emerging in 2009, Dinner And A Suit quickly captured attention with a captivating blend of ethereal rock and distinguished pop – leading to critical acclaim, a swelling dedication of global fans and coveted live dates that have circled the band throughout the US.
*******************************************************
Please if you have any questions, comments, or suggestions for musicians that you want to see – or are interested in being booked for a concert date – contact – Michael Nunez – Noontime Concert Series Chair – at the email address below.spanoontime@gmail.comPlease visit The Student Programming Association’s webpage and facebook pages for more upcoming Penn State concerts and events at:
http://www.spa.psu.edu/

This event is FREE so don’t miss out on some great music!