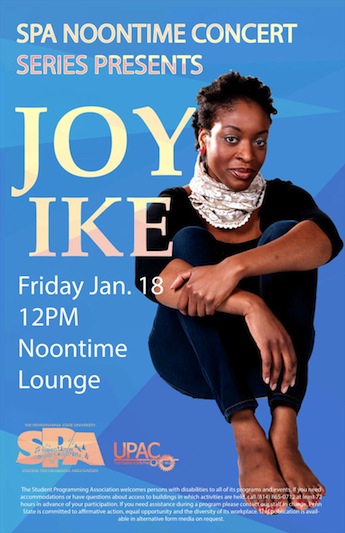 An artist’s work is essentially her diary – often reflective, most times vulnerable, but always honest. In her 3rd full-length album, independent artist Joy Ike offers her most realized work yet – All or Nothing – 10 songs about giving up everything you have in exchange for everything you need.

Not yet a veteran, but more than a newcomer, Ike is and always has been an anomaly. As a singer/songwriter who purposefully refuses to be pigeon-holed into any one specific genre, Ike’s path has consistently taken an “anywhere for anyone” approach. Theaters, house shows, coffeehouses, churches, colleges, “…any opportunity where there is a chance to cultivate a relationship with the audience and know that I’ve spent my time well is where I want to be,” she says.

Leaving her career as a publicist in 2008, Ike has since played over 400 shows and has had the opportunity to share the stage with artist Deas Vail, Butterfly Boucher, Dwele, Chrisette Michele, Tyrone Wells, Najee, and Jeffrey Gaines to name a few. Her songs have been featured on NPR’s All Things Considered and Relevant Magazine’s The Drop; and her unique style has afforded her the opportunity to play such festivals as Lilith Fair and Purple Door.

Born to Nigerian immigrants, Joy Ike’s music, voice, and writing has drawn comparisons to female musicians such as Corinne Bailey Rae, Regina Spektor, Norah Jones, and Fiona Apple. But her percussive piano-playing and soaring vocals give homage to her African upbringing. “Some of my earliest memories involve sitting in the living room with my family singing Nigerian choruses and finding ways to harmonize with my father’s booming voice and my mother’s soprano harmonies,” Ike says of her formative years. “I also remember listening to a lot of DC Talk and Steven Curtis Chapman as a teenager…and then discovering Gwen Stefani and Vertical Horizon in high school. There were so many options!”

With so many influences, perhaps the voice that Ike has found for herself comes as a surprise to many. It is not Christian Contemporary, Alternative, R&B or Gospel, but a genre she affectionately refers to as Soulfolk – a soulful approach to a style of music that has often been reserved for guitar and banjo players.”