Chris Will
Mainstream Music, Music
Comments Off on Spring Break Out Acts of 2013: Jon Bellion 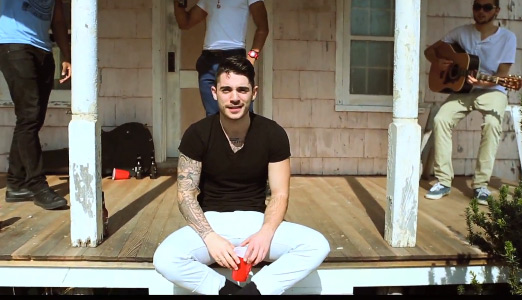 A pop artist with no boundaries and a man who both reinvents and defies the genre at every turn, Long Island native Jon Bellion is well on his way to taking over the year 2013 (and beyond). Bellion’s already started sending tremors through the industry with his standout debut Translations Through Speakers, a self-produced, homegrown mixtape that sounds better than most major-label albums. He became an online sensation through his whimsical cover of Drake’s “The Motto,” but this 10-track release is where the real magic is. Translations Through Speakers easily proves that, regardless of the path Bellion takes in his career, he already has a seat saved for him in the top tiers of music stardom.

Exhibit #1: “Paper Planes,” a track he dropped early last fall as a first taste of the mixtape. This “taste” was more of a full-course meal, and started a craze as critics gawked at this majestic mix of sounds. A shy a cappella beat shuffles along as Bellion gently introduces us to this tale of fallen love, before everything blooms into gently lapping synthesizers and Bellion’s glistening falsetto. Flourishing background harmonies cushion against Bellion’s bittersweet hook, and as the second verse begins to peak over the soft horizon he switches focus. Bellion then flaunts his impressive flow, coolly exposing his reservations as he watches his career unfold. “My pockets getting filled, but really emptiness is all I have.” The fading sound of an airplane closes out the record among the slick layers of vocals.

Other somber tracks such as “LIFE” and “Waves of Loneliness” vibe with that same rich, fairy-tale pop production. “LIFE” depicts a young woman and man fighting to hold onto their hope and aspirations amidst a cold and confusing world. Squiggly synthesizers and airy vocals counteract the weighty piano riff, creating a tone that’s not overdramatic or downtrodden, but more determined. In “Waves Of Loneliness,” Bellion looks back on a failed relationship, projecting a strikingly realistic mix of guilt, jealousy, sadness, and acceptance. Throbbing keys shudder as the instrumentation surges against the chorus, timing perfectly with Bellion’s refrain of “the loneliness comes in WAVES.”

Not all of Translations Through Speakers is serious, nor is Bellion’s songwriting all metaphorical. A good portion of the mixtape shines with undeniable humor and blissful youth. “Dead Man Walking” is a lighthearted, acoustic affair, and here Bellion recounts a scandalous and hilarious one-night stand with a longtime family friend. “While You Count Sheep” is another half-acapella track, allegedly recorded while Bellion’s lover was sleeping on the couch in the studio. The comfy orchestrations in the chorus, combined with Bellion’s smooth rhythm, give the track a charming and romantic quality.

And what’s BETTER, you can get the entire album for FREE! Click here to download Translations Through Speakers on ThisSongIsSick.com.