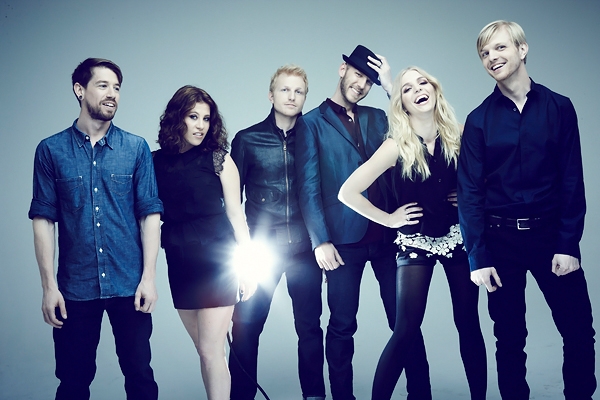 North Carolina sextet Delta Rae could write a song about cooking breakfast, and it would still be a grandiose and profound affair. This up-and-coming band is a glittering, flawlessly cut musical diamond, buried under miles of mainstream rock and sediment. America is slowly, but surely chipping through the layers, fueled by Delta Rae’s astounding live presence, significant underground following, and most importantly, their freshman debut Carry The Fire. To solidly pinpoint Carry The Fire underneath one genre would be impossible. Gospel, rock, pop, country, folk, and a capella surge throughout every single track on the album, and each song is a story within itself.

Most importantly, Carry The Fire is organic to the core. You won’t hear a dubstep drop or a single lick of autotune within the confines of Delta Rae’s debut. Nor will you find fluffy, party-centered lyrics, filled with expensive cars, expensive alcohol, and expensive beats. What you will find is a soul-searching release that reaches out to the masses. Ian, Eric, Brittany, Elizabeth, Mike, and Grant use Carry The Fire to explore the world around them, delving into love, heartbreak, depression, hope, death, and just about everything in between. But Delta Rae isn’t made up of age-wizened folk-legends. These are six young men and women, experiencing the misery and joy that comes with struggling through the first years of adulthood, growing up while keeping an eye on the setting sun of youth. And that perspective gives Carry The Fire a refreshing spunk, a kind of innocent ache that you won’t find in the newest Death Cab or Dave Matthews album.

What makes Carry The Fire such a unique and under-appreciated work of art? It’s the sunny guitars in “If I Loved You,” gospel-like harmonies and bright horn sections barely clothing Elizabeth’s beautifully mournful voice, trying to make sense of her deficient adoration for a love-struck suitor. It’s the bone-deep sorrow in “Country House,” as Ian ponders the widespread loneliness around him amongst a contemplative acoustic guitar, stunning to the very last second of its moving, anthemic end. It’s the quiet power that builds in the beginning of “Bottom of the River,” Brittany’s awing vibrato tearing through the stony percussion and death-knell chains, rising into an exhilarating and terrifying close. It’s the unadulterated, down-to-earth soul in “Morning Comes,” brushed by piano-driven rock and featuring Eric’s astonishing vocal talent. It’s the bleeding adoration in “Unlike Any Other,” it’s the twinge of bittersweet regret in “Holding On to Good,” and it’s the joyful celebration of the afterlife in “Dance in the Graveyards.”

Long story short, Carry The Fire is less of a physical release and more of a musical experience. This is not an album with one or two radio-desperate singles, breached by a spattering of half-assed, unnecessarily polished album fillers. Nor is it an album centered on a mainstream-friendly smash, surrounded by abstract, experimental indie-rock. No, Carry The Fire is a solid effort from start to finish, flaunting an array of sounds that appeal to a wide range of musical palates. This is a record that bespeaks of Delta Rae’s pure musicality, and on its own, is a far more impressive effort than most veteran alt-rock bands could even attempt to create. Do yourself a favor, expand your music tastes, and purchase the album either at a local retailer, Amazon, or iTunes!