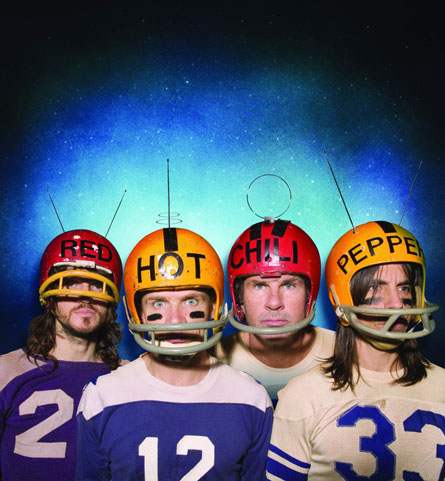 “The Chili Peppers have been through more shit than anybody. I mean, you could write a book”

Well he’s right. In fact, there have been many books written about the band and its intense history with death, drugs, sex, funk, and life changing experiences over the course of 27 years and 10 albums. The Chili Peppers are, I believe, one of the most talented group of men to ever grace the music industry with their presence. First of all, you have Flea, one of the most amazing bassists to ever exist. Next, we’ll mention John Frusciante, a huge part of the band for so long, and a god on the guitar. And of course you have the crazy drummer Chad Smith, who came into the band as kind of an outsider, but found a home in the Chili Peppers (being a master of funk and just a super cool dude in general). But lets not forget the original guitarist, Hillel Slovak, who was taken from the band so tragically and too early. There were several other members to spend some time with the Peppers, including Dave Navarro and Josh Klinghoffer. Each of them contributed to the band just as wholeheartedly and passionately as the longest standing member of the band (with the exception of Flea, but they’re best friends so it’s kind of like one in the same), Anthony Kiedis. Kiedis’s struggles alone make up a huge part of why this band means so much to me.

I could go on and on about the details of every song, and the history and meaning behind them all. I could talk for days about how you find yourself so in love with the sounds, feelings, emotions, and lyrics that come out of their music that you find yourself crying during “Under the Bridge” at  their Bonnaroo performance (No? That was just me? Ok.). No other band has touched me like the Red Hot Chili Peppers. The energy that comes from their music and performances hasn’t faded after all these years and there’s truly no other band like them. Every song has a meaning. Every song has a purpose. Every song is funky as hell. And every song makes me fall in love with them more. This Thanksgiving, I honestly have to say that I am truly thankful for the Chili Peppers and everything they’ve been through in their lives that has made them the incredible men they are today.

Now, its very hard for me to pick a favorite song or two or three. So, I’ll leave you with some of the songs that just pop into my head: