State In The Real Interviews A Lot Like Birds 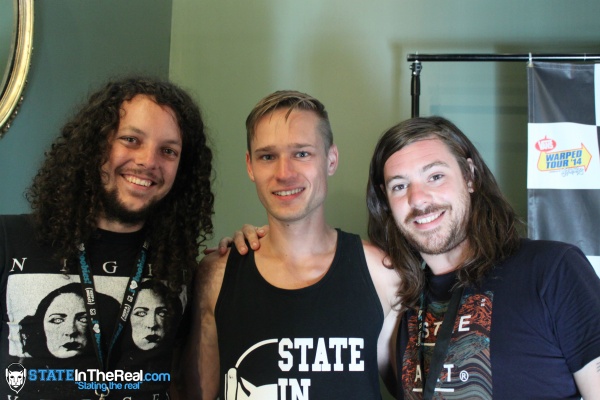 We got the chance to sit down and talk with Cory Lockwood and Kurt Travis, the two vocalists from A Lot Like Birds. Late last year, the band released their groundbreaking third album No Place, which further cemented the band’s sound and creativity. The album is a concept album where the narrator visits his abandoned childhood house. Each song takes place in a different room of the house, and explores different emotions, memories, and associations the narrator (and listeners) have with these places. It’s a dark and twisted album, and we talked with Cory and Kurt about it.

Please introduce yourselves.
Cory: I’m Cory,
Kurt: and Kurt, from A Lot Like Birds.

How’s the tour so far?
Cory: Awesome. This is our first time on Warped so it’s just an incredible experience for a band. We get to play music to a lot of people who might not have heard us otherwise.
Kurt: Yeah I agree. It’s a great opportunity for us. The crowds have been awesome. We couldn’t be happier.

How are you beating the heat?
Cory: Fortunately not the whole tour has been very hot. It’s been alternating days.
Kurt: Some days will be deceivingly hot. It’ll look like it’s not that bad. “Oh I don’t need to put sunscreen on,” but really at the end of the day you’re like “Oh my gosh.” But Texas was pretty humid. Arizona, New Mexico. I love the people, I love the people. But I don’t know how they deal with it.

So your latest album No Place came out at the end of last year. It’s a concept album and each song is essentially a different room in a house with the connotations, the emotions and the memories that are associated with those places. Who came up with that idea?
Cory: Well, we knew that we wanted to do a concept record, and I think we sat on the idea of doing it for a while, and we’d throw out ideas, like, “Let’s do space,” or “Let’s do this, or that.” And I think it just sort of came naturally to all of us that a home would be a perfect way to explore different segments of emotion. For me personally, concept records are scary, because if the concept itself doesn’t resonate with one person, then you’ve alienated an entire group of people, whereas a house, allowed us to explore a bunch of different things. Even if you don’t resonate with this song, you might with this one.
Kurt: Also, since we were constantly on the road, and very much winging it, just hoping we’d get through shit…and loved ones at home…for me at least, we were very, very not around our home base. So the concept of home was…we’re promoting this thing, we love this thing, we love this music, we love this art, but there’s a whole nother thing at home waiting. If you’re in a different city every single day, there’s not very much interaction. I’ve even heard [Cory] say because we were not at home…
Cory: No place WAS home.
Kurt: No place was home. Exactly. I couldn’t wait to get home. I love what I’m doing, but it has it’s [downsides]. It’s not candy and roses. It’s been a gruesome, life changing, mind-altering experience. Shit that I would never do, I have done because of it.

You touched upon the idea of a concept record appealing or resonating with one person. I personally, right when the first song “In Trances” started…I love that song because my grandparents used to babysit me while my parents worked, and I heard that melody every day, every hour because they had a grandfather clock. So right when I heard that song, it brought me back to my childhood, and I kind of associate the house in the album with my grandparent’s house because of that. With that song specifically, for example, were you trying to get that kind of connection, or did you really just like the melody? (note: this melody is called the Westminster Chime).
Cory: It was intentional. We didn’t write that song until we were in studio and decided that we wanted to have an entrance-
Kurt: And welcome you into the house. And once you’re in the house, you’re in the fucking [house]. And that’s why it goes *recites Westminster Chime melody*. Then in the basement, on “No Nature,” it’s diminished. *recites guitar riff from song, which is a distorted version of the melody*. It’s pretty thought out.

With the songs, a lot of them are very personal. There’s a narrator, but a lot of them are personal. Was there one person writing the lyrics to these songs, or did you guys come together and say, “This is how we feel about this room.” Or did you have conflicting views about certain rooms and how they should feel?
Cory: There are some rooms where the theme is constant throughout. Then there’s other rooms where it is sort of black and white, which I think felt extremely natural because we explored it through various situations. “Hand Over Mouth, Over and Over” it is, from his perspective, a very heartfelt, loving song, and darker on my perspective. Each room is represented in a different way. Sometimes there’s two different opinions, sometimes it’s the same one.
Kurt: “Connector” was one of those songs where we took it and was like, “Okay, this is the hallway of the house.” We’re going to start and finish in the same way, kind of like a mirror image. We definitely collaborated and came together on that song.

And what is each of your favorite song on the album?
Cory: I personally like “Recluse” a lot. We got to step out of our comfort zone a lot with it and I’m always partial to that song. I love that song so much I can’t even describe it.
Kurt: I think I know why. We got that song last, when it was mastered and mixed. I wore the fuck out of every other song, and then “Recluse” was one of those that Kris (Crummett) was holding onto, and didn’t give it to us yet. At least in my opinion, that song is amazing to me because it’s the newest. It’s refreshing, and we never play it either. It was mixed last, and it keeps its freshness.

Is that your favorite song too?
Kurt: I have a soft spot for every single song I’ve recorded in my whole life, so it’s kind of all relative. But that’s one of the favorites.

And what are your plans for after the tour?
Cory: Our guitarist is going off to write a side project (note: Michael Franzino and his project alone.), so we’re going to write on our end while he does that, and then come together and try to record the next album.

Is that going to be a different dynamic? Because Michael writes a lot of music right?
Cory: It may or may not be. Although Mikey does write a lot of the music, Joe our drummer writes as well, and he wrote some of the songs that are…I don’t want to preview or spoil anything because this may not necessarily be that accurate, but Joe wrote “Next to Ungodliness” and “Think Dirty Out Loud,” and that’s a direction we want to explore further. So I’m not saying the next thing that we write is going to sound like those two songs, but we do have that in our pocket to write with while Mikey is away.

That’s interesting because those songs were also some of the singles that you guys have had [from the past two albums]. Those were not written, or were only partially written, by Mikey?
Cory: I mean he wrote guitars for them, but the structures of the songs themselves was our drummer.
Kurt: Our drummer was like, start to finish, “Here’s a song. Guitar players: put them on.”

Is there anything else you guys want to say?
Cory: Thanks to everybody who’s come out to see us on Warped Tour so far, and who have supported us through touring out No Place. We’re excited to slowly but surely get to work on the next [album].
Kurt: Shout out to our SoCo friends: Dance Gavin Dance, Hail the Sun, Stolas, I the Mighty, My Iron Lung, Night Verses, HRVRD, all those bands. We love them to death. And we would not be where we are if it was not for those bands.