State In The Real Interviews Crossfaith At Warped Tour 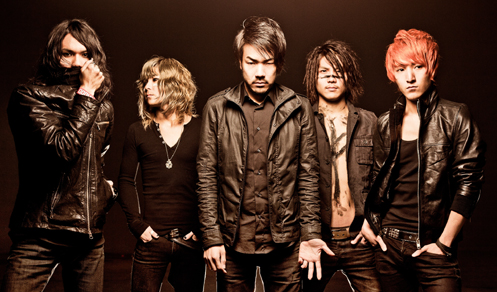 Last week at Warped Tour, I was able to sit down with Kenta and Hiroki of Japanese metal band Crossfaith. Formed in 2006 and from Osaka Japan, the band played Warped Tour UK in Alexandra Palace in London.  Their first Warped Tour around the United States, the guys were friendly and eager to return to as soon as they possibly can. Their Facebook about page describes them best, as a “rare and genuine Japanese rock band that can be rated high internationally and their quest of artistic imagination goes on and on.” Their third album Apocalyze comes out on the 4th of September and you can check out the video for We Are the Future, a song off the album, below.

So how’s Warped Tour been for you guys so far?
K: Oh, it’s been great!
H: It’s been amazing. To be here is like my dream; when I was here I’d always listen to the Warped Tour compilation, so I’m so happy now. I already miss the tour.

Do you have plans to come back again?
K: Right now we don’t have any plans to come back here, but we’d love to come back as soon as possible. So I think probably next year, because we already have a lot of offers for tour this year. After this we go straight back to Japan to play a festival.
H:  Summer Sonic (check)
K: And after that, we’ll be in the UK and then Austrialian tour with Bring Me The Horizon and Of Mice and Men. After that, we have Warped Tour Europe, and Warped Tour London.  I’m so excited about everything.

How have you guys been dealing with the heat?
K: It’s been hot!
H: It depends on the place, like before Texas it was not that hot.
K: Around East Coast it was much better, but in Las Vegas it was…
H: It was a nightmare
K: That weather was murder. On stage, my shoes were melting.

What has been your favorite moment so far on tour?
K: I’d like to say that every second is a great experience.
H: Last night our drummer, Tatsuya, he won a drum-off competition. The last round, it was Crossfaith versus Black Dahlia Murder.
K: Which is a true metal band.

Have you had a good reception with fans gathering?
H: Yeah, I think fans are younger here than in Japan. They are about 20, and here everyone’s like 18 or maybe even younger.
K: And Japanese music and Western music is completely different; Japanese music has a different rhythm and different lyrics, different beat and a different melody. So for me, first Western band was Aerosmith, when I was a junior high school student. I think you guys listened to Aerosmith at like 6years-7years old.
H: It’s very different.
K: That’s reason why there’s the different age.

Is there a difference in the way your fans react here and in Japan?
K: Oh yeah!
H: Yesss.
K: Japanese audiences are a little bit quiet, more quiet than here.
H: Especially between the songs
K: But, they don’t dislike the band, just respect for the band
H: They just want to listen
K: They try to listen. It’s very hard for Japanese people to understand because they don’t speak English

So the songs that you play, are they all in English?
K: In English, yeah. Except speech, I always speak in Japanese on there. I think I’m going to confuse our first show, once we get back home
H: Yeah, every time we get back from out of Japan, he always says that after the show
K: I try to speak in English this whole tour, once I get back home I get confused

Lastly, I know you said you’ve got a lot of offers coming up, so what are your plans after tour?
K: After this tour we head back and have Summer Sonic, and Reading and Leeds in the UK
H: Also tours with Bring Me the Horizon and Of Mice and Men and Skindred
K: Also, we’re going to do a headline tour in September

And how is it being on tour?
H: It’s fun! I miss my friends, sometimes I feel homesick, but this is what I want to do
K: Also, there is no time to think about the other things