State In The Real Interviews Dan from Four Year Strong 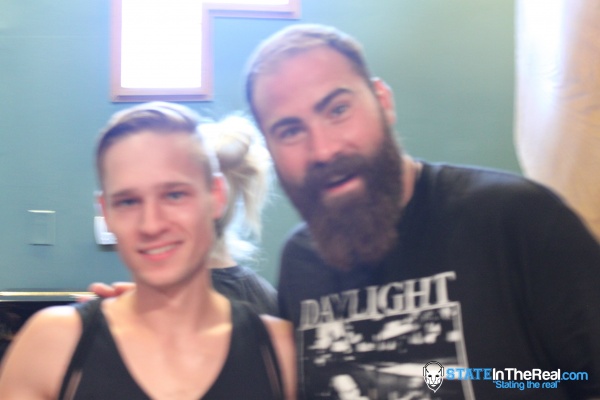 At the Holmdel, NJ date of the Vans Warped Tour 2014, we got the chance to talk to Dan O’Connor, co-lead singer and guitarist of Four Year Strong. The band recently returned from a short hiatus. They’re back after a much needed break, with a new EP coming out on a new label. Dan talks about the time off, the new EP, and how he feels about coming back to touring after two years.

How’s the tour going so far?
The tour’s been great. All the shows have been awesome. The weather has been really good, especially for Warped Tour. It’s usually super hot. Today’s probably one of the hotter days, but it’s only like 85 so that’s okay.

The band took a little of time off. Not to get too personal, but what were you guys doing? Was it planned, or did it just happen?
It kind of just happened. We did Warped Tour 2012, and after our last record we finished our contract with our label, because we owed them two records: Enemy of the World and In Some Way, Shape or Form, and that was basically it. So we were free, and instead of signing to a new label, we were like, “Why don’t we take some time off?” We’d been touring forever. I had just gotten married recently to that, and a couple of us had bought houses, stuff like that. We kind of just wanted to take some time and kind of enjoy it for a little while. We all got dogs. We all wanted dogs but we couldn’t do that because we were touring too much. So we all got dogs. I had a kid right before this tour. You know, real life stuff. We kind of just wanted to go home and relax for a little while and get back to normal and hang out with girlfriends, wives, family and all that kind of stuff. We hadn’t seen them in forever. We just wanted to do that. There wasn’t any kind of break up or “beef in the band” or anything like that. We were just like, “You guys wanna go home?” and “Yeah sure, let’s go home.” Then pretty much around last summer, Alan and I just kind of started talking about getting together and doing some writing, and that’s basically it.

Some much needed time off. So the new EP Go Down In History is coming out in roughly two weeks. What can we expect from it?
It’s five songs- the first five songs we’ve written since our last record. It’s really cool. I think that it’s a lot more high energy than our last record. I think, especially when we were writing this, we knew we were coming on Warped Tour, and we were going to do the tour with Bayside before it. So we really wanted to write songs that were a little more-
*someone walked through the hallway and tried to get through a locked door next to us and left*
We were just looking forward to writing some live songs, and songs that kids could jump all over each other to. So that’s what it is: five fast, super riff-y songs. They’re probably the riffiest songs we’ve ever written. I don’t know why, but for some reason after taking this break- I don’t know what Alan and I were listening to- but when we got back together, everything we were writing on guitar was bonkers. We were like “How are we going to do this?”
*plays an air guitar with a lot of finger movement*
But we figured it out.

Yeah I was going to ask, was there anything you were listening to that was making the songs riff-y?
I don’t really know. I don’t think we listened to anything new during our time off. I actually listened to a lot of-
*someone else walks through the hallway and tries to get through a locked door*
Where was I?

Music you were listening to.
Oh yeah. We were kind of listening to softer stuff, and really just not intense stuff. Maybe that’s why we wrote such intense music- because we didn’t listen to any. So I came back and I was like, “Let’s write riffs!”
*another air guitar motion, this time with shredding sound effects*

Is there a little bit of anxiety about releasing the new EP, since it’s been a little while since the last album?
Not really, because the thing with our band now especially is that there really isn’t anxiety over anything, because we really don’t have any expectations over anything, because we’re-
*another person tries to get through the locked door*
We don’t really have much anxiety in the band because we’re adults now and we have things going on at home. We have to keep a balance between the band and home as it is. We’re here doing this because it’s what we love to do. We’re not treating this like, “Oh we have to do this we need money,” or “I need money,” or whatever. It’s really just down to the fact that we tour and we make music because that’s what we love to do. So there really isn’t a lot of anxiety over it right now. If kids like it, awesome. If they don’t…awesome. I don’t know what to say. *laughs*

Is there anything else you want to say?
Not too much. Just come hang out on the Warped Tour or any tours we do after that, and go pick up our new EP.

Cool, thanks Dan.
No worries, thanks.