Aizya McGee
Music, Outsource Interview
Comments Off on State In The Real Interviews David Of Big D And The Kids Table At Warped Tour 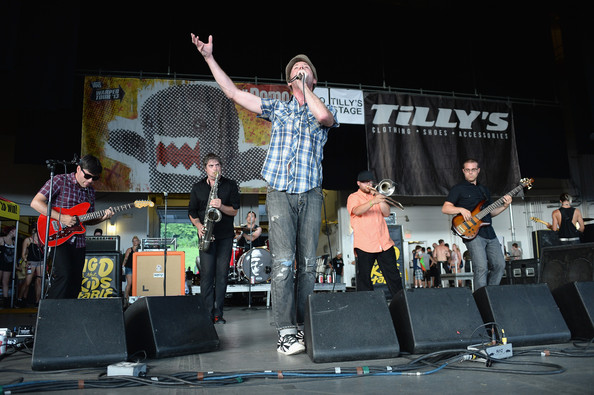 Big D and The Kids Table, are definitely not a band new to the music scene, they have been making Ska music for all to enjoy since 1995. Their ninth and tenth studio albums Stomp and Stroll were released earlier this summer on June 11.
I was unfortunate enough to miss their set on the Domo Stage, but lead singer David was nice enough to take some time out to talk to me about the heat (mostly Nevada), music, and the tour.

How’s your tour experience been so far?
D: So far, this is Big D’s ninth Warped Tour, not full, but ninth time walking out into the field. It’s going good; it’s been a fun summer. I think my favorite bands were Gin Wigmore, Five Knives, and MC Lars. Some of the guys like Stick To Your Guns and Defeater; and Tonight Alive, right at the end we were all like, “yeah, they’re awesome!”

I’ve been asking everybody this, but what have you been doing to beat the heat?
D: Well, you have a bus, but sometimes the bus AC can’t overpower the heat, so the bus will be about 90 degrees. The three worse states are New Mexico, Arizona, and Nevada, but at least in Nevada we had a casino, so we just kind of drank alcohol. [We chatted about how hot Nevada was. Many kids passed out] But it’s been a good Warped Tour, we had some van and trailer problems, but Reel Big Fish had the worst; so, nothing to complain about.

Since this is your ninth, how have you seen that Warped Tour has changed over time?
D: I definitely think personally I saw change in the overall attitude of the people coming to Warped Tour. When Paris Hilton and Travis Barker got big, you know that time? Those years where Travis Barker and Paris Hilton were popular, the shape of the concert goers changed more to those kind of people; I guess it’s called the “Me” generation? But you could see it; there was more like the punk rock generation, there was that going on, and then when they [Hilton and Barker] got big, then the new generation started. There’s no good or bad, I mean, going from the 60s to the 70s musically or the 70s to the 80s musically it’s going to change. I think Sierra Lyman said it well, she said, “nothing changed, it’s just a different part of inside you is being opened by the different generations.”

Do you have a favorite song to play on tour?
D: My favorite song on the tour is Black Sheep from Gin Wigmore, but my favorite song for us to play is Healthy Body, Sick Mind, which is a cover from Operation Ivy so it’s not even one of ours. But if it has to be OUR song, I think our new song Stepping Out, that’s the most fun.

Do you notice the audience you play for kind of grows? Or is it different in different cities?
D: What was weird for Reel Big Fish and I this tour is, we asked people, like we have our own fans, but we asked the crowd and we talked in the signings, we go like, “hey, you’ve ever seen us before?” and everyone’s saying, “no, we’ve never seen you before” which is a huge deal, to have new people coming out. For the Ska bands on tour, it was very interesting, but they were like, “yeah, you guys rule!” I think less of our immediate fan base is showing up to the concert because there’s not enough of us for the ticket price, so we’re excited to get new people.

Lastly, what are your plans for after tour?
D: Okay, so the day after tomorrow, [this was second to last day of tour] I have never done this in my life, usually when we go on a tour like this, I drive in the van to the bus or I’ve got a ground crew. For the first time in my life, I fly home; I feel pretty special. And because it’s my girlfriend’s birthday, and so I’m going to fly home; that’s just personally. The band is going to get ready for our Halloween/Fall tour, and we have our DVD coming out, which is footage from 1996-2013, 17 years of footage.