State In The Real Interviews MC Lars At Warped Tour 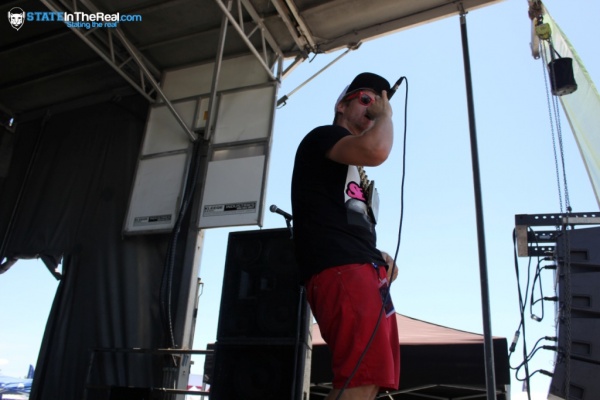 If you haven’t heard of MC Lars, this is your lucky day. I sat down with him during Warped Tour and talked to him about his music, his thoughts on Warped, and his plans after tour. A rapper who is more than a rapper, he uses Tetris and Super Mario music as his beat, he has Edgar Allen Poe raps, and he has done ska music. I can only describe him using his own words, “this hodgepodge of the cultural nostalgia, pop culture stuff.” He has joyful smiles and energy all around, whether he is onstage or off.
After our interview, he  told me of how he went abroad his sophomore year at Oxford, studying Shakespeare. “And that’s just the greatest thing I’ve ever done. It allowed me to do this because I met a bunch of punk and indie bands, and I talked them into letting me open for them. If I hadn’t done that, I wouldn’t be at Warped Tour.

So for you, how’s tour going so far?
L: It’s been great. We’ve got a lot of new fans this summer, and I do my literary rap songs. It’s been awesome, it’s my third Warped Tour and I love this thing. But, I don’t think I’ve been this tired in my life ever. But it is joyful.

You said this is your third time on Warped. Do you notice each time that your crowd/fans kind of get bigger and more hyped up into it?
L: Yeah, something that helped us a lot this year was being on the Warped Compilation. We got a lot of younger fans, and then the younger brothers and sisters of people who came before. It grows, every year it grows, and that’s awesome. I think Warped is the kind of thing where, if you really want to work and promote yourself and be nice to everyone and be out at merch all day like I always am, then it works to your benefit; you can then tour and play clubs and headline and it’s great.
[I’m like the William Beckett of rap]

What has been your favorite moment so far on tour?
L: Right now. (not really though…) We had a day off in Northern California, and they rented these houseboats and went swimming, it was great. I also rapped with Aquabats when they were on, and I’m joyful. It’s been great when I realized the set worked cause I was doing more, I’ve been doing more, stuff with the MBK, like the drum machine, and my drummer; realizing that the set worked without a full band—the first times I did it with a full band—and on the dance/hip hop stage you don’t need a full band. So to realize that was all good.

What do you feel you bring to the Warped Tour stage?
L: Yeah, it’s no longer just like Rancid and NOFX and Pennywise, which are great bands. Kevin put me on because I’m the first and only rapper who does like Edgar Allen Poe raps, skanking, and like kids put up their Star Trek rap hands, and we have a mosh pit to Tetris music, you know? And I rap on a Super Mario beat. It’s like this hodgepodge of the cultural nostalgia, pop culture stuff that I grew up with, and I’m able to mix it up like a mixer and put it out, but still bring that punk rock energy and fun. I think Warped Tour is not so much a genre –specific festival, but an attitude specific festival; it’s like, good positive mental attitude, love, family, hard work, respect. There are no rock stars, everyone just hangs out, everyone just hustles, even everyone who comes just to do interviews, and all the people who work in production. It’s beautiful. I would do this tour every year until I die if they asked me to, cause it’s just great and there’s nothing like it, and it’s very eclectic.

What’s your favorite song to play?
L: This summer it’s surprised me, we have this ska song I did with the Aquabats a few years ago, and that’s just somehow become popular with everyone. I think ska is big this summer, you know? So that’s been fun, because I get everyone to skank on stage, and there’s always a skank pit. Today in the mosh pit, for my Tetris song, it got rough, I almost didn’t even make it back on stage. I was actually like scared.

So how have you been managing to deal with the heat?
L: It’s not easy. Me and my drummer, we’re at the merch booth all day, just hydrating. I lost a lot of weight this summer, you know? And that is crazy. It’s fun, it’s fun. Our tour bus doesn’t have AC, which sucks; I’m not going to sit here and complain about my tour bus, but it is not comfortable. You just gotta be hydrating, and I’m so thankful that we’re able to have free water all day and have interviews in this AC San Antonio Spurs building.

Lastly, what are your plans for after Tour?
L: So I have a TV show I’m working on, it’s called “Yes Yes Y’all”, if you go to mclars.com, you can watch a preview of it; I’m working on that , It’s me and these four robot puppets, we travel through time, we solve crimes, and we meet people from history [think Doctor Who-esque]. I’m working on a book, a History of Hip-Hop book, and I’m doing a new record. And then I go to England with this band called Wheatus.