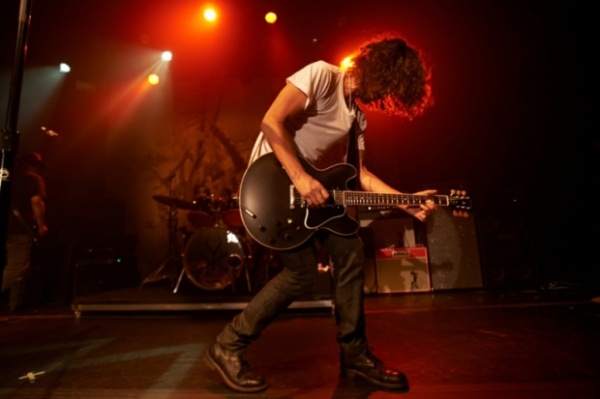 Head-to-toe denim ensembles, intriguing tattoos, slightly beyond middle-aged parents reliving their youth, and of course, a whole lot of beer are some of the many things one can find at a rock show.

This past weekend I had the opportunity to attend an Alice in Chains and Soundgarden concert at the Susquehanna Bank Center in Camden, NJ.  It was a chilly weekend, and it unexpectedly rained ironically right when the show started and stopped when it ended. But it was okay because we had lawn seats.

Dealing with the rain seeping through my expensive poncho and soaking up my vans was kind of like having to deal with Buckcherry perform as one of the opening acts. Okay, I’m kidding. Their performance was good, as was one of the other opening acts, Cheap Trick, who sported glitzy costumes and decked out instruments. They definitely made the middle-agers jump and dance around with songs like “Dream Police,” as the teens and the younger generation were swoon with “Surrender” and rocked out like Guitar Hero was set on expert, and they hadn’t missed a beat. The classic quartet also performed “I Want You To Want Me,” which made everyone nostalgic, crinkle their eyebrows and serenade the person sitting next to them. Thumbs up, Cheap Trick.

Finally, after much anticipation, Alice in Chains took the stage. For those not familiar (and shame on you), AiC is an early 90’s grunge band from Seattle, which sadly took a fall when lead singer Layne Staley’s drug addiction affected the band’s progress, and ultimately led to his death in 2002. William DuVall has since joined the band as lead vocalist, and proves to AiC fans of the past and present that they’ve still got it. DuVall’s voice droned over the band’s heavy as hell sound and hypnotic harmonies as they opened their set with “Them Bones.” They played most of their old classics, and my favorites like “Nutshell,” “Would?” and thrashed through their most popular song “Man In The Box.” With a new album coming out May 28th (The Devil Put Dinosaurs Here), fans were a bit disappointed to not hear anything new but their pre-released singles, “Stone” and “Hollow,” which are monster songs, and impress everyone who thought AiC should have died with Staley. Needless to say, Alice in Chains put on a phenomenal performance, and I hope to see them live again in the future.

Then, the moment came that I had been waiting for; to see Chris Cornell walk out on that stage, and sing his bearded-pretty-little heart out. Which he did, effortlessly. Soundgarden’s performance was on point, and Cornell’s vocals were perfect. He belted through songs with just as much, if not more clarity and purity than he did in the 90’s.  The Seattle grunge band played a wide variety of songs from their oldest albums, like “Beyond The Wheel” from their 1988 album, Ultramega OK. Soundgarden actually ended the show with this one, which is a dark and foreboding song that seriously showcases Cornell’s insane vocal range. Some crowd favorites of their set were “Big Dumb Sex” and the song “Ty Cobb” which I would describe as being a little more on the punk-rock side, and just brimming with profanity. Of course, they played their classic hit, “Spoonman,” but not “Black Hole Sun” which I thought was surprising. I wasn’t upset though, even though Chris Cornell never reacted or actually even heard all of the obscenities I shouted at him (and never took his shirt off), because I still heard my personal favorites like “Jesus Christ Pose,” “Outshined,” and “Rusty Cage” from their 1991 album Badmotorfinger. The band opened with my favorite song, “By Crooked Steps,” from their most recent album, King Animal, so all was well in my world. I have to say though, my favorite part of the show was when Cornell threw the band a curveball, and invited a fan to the stage that had a sign requesting to play guitar to the song “Fell On Black Days.” Cornell told the audience that he doesn’t normally do this, and told the kid in the pit “no” between songs, but saw his disappointment, and felt like he was going to cry if he didn’t let the fan on the stage (and also noticed he was wearing a Soundgarden t-shirt). So basically, Chris Cornell is not only beautiful, amazingly talented and has great hair, but he is a saint and made this kids LIFE by letting him jam with his favorite band in front of thousands of people. He sounded really good, too. Hats off to Soundgarden. Bravo, guys. Bravo.