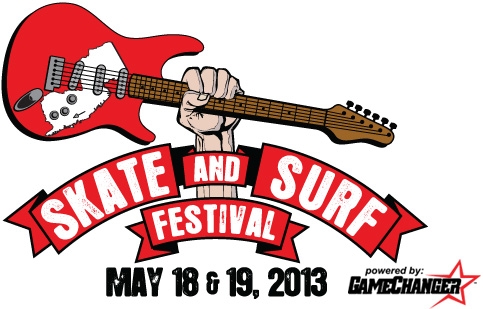 Summer is approaching us quickly, Penn State! It’s hard to believe only about a month left remains in our spring semester here at Dear Old State. Although the bitter cold we’re still struggling to deal with may not seem like incoming summer weather, I promise it’ll be here…eventually. Regardless, summer comes with a lot of things: the beach, the sun, the friends and most importantly the music. Whether it’s the song your blasting with the windows down, or the concert you attend on a warm summer night; music can define your summer. Easily, the best part about summer is the outdoor festivals, and this summer is even more so special because 2013 has been graced with the return of New Jersey’s beloved Skate and Surf.

The Skate and Surf festival is returning after an eight-year hiatus to Jackson, New Jersey to kick things off for the “summer festival season”. The festival was originally going to be held in Freehold, New Jersey, but due to capacity it was better suited to move this year’s festival to Six Flags/Great Adventure Theme Park! Personally, I’m pretty involved in the Philadelphia/Jersey music scene, and while I never had the chance to attend Skate and Surf before it went on hiatus, almost all my friends are so stoked to see this festival back. The festival is set for the weekend of May 18th and 19th and is showcasing a wide range of band and artists from all across the board with an emphasis on punk genres.

Other bands and artists are still getting added on as the festival draws closer.

According to the Skate and Surf official website, “The festival line-up showcases some of today’s top national recording artists as well special reunion performances. During its reign, the Skate and Surf Festival presented the best musical talent spanning multiple genres while keeping to its core mission of artist development featuring up-and-coming acts who then became break-out artists.”

While I’m still a little heartbroken that there isn’t a Bamboozle this year, without this festival, Bamboozle wouldn’t have even existed.  Skate And Surf Festival will also host the “The Break Contest,” a staple of The Bamboozle. The official unsigned band competition is currently being held in several tri-state venues. For more information on The Break Contest, please visit: www.TheBreakContest.com/

It’s pretty awesome to see this festival back and I expect big things in it’s returning year. For a complete list of performers, weekend schedule and information about tickets, please visit:www.SkateAndSurfFest.com/ and State In The Real will see you in Jersey!