Summer Jam of the Week: "One Thing" (One Direction cover) by Kait Weston

Chris Will
Mainstream Music
Comments Off on Summer Jam of the Week: "One Thing" (One Direction cover) by Kait Weston 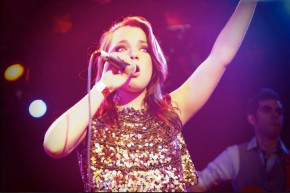 Anyone can do a cover.  It takes real talent to take an original song and craft it into an entirely new product, one that not only adds depth to the original but also showcases the musical prowess of the musician(s) covering the hit.  Youtube sensation (and avid THON supporter) Kait Weston is a pro at this kind of thing.  Her covers of slow, burning ballads such as Jessie J’s “Who You Are” and Demi Lovato’s “Skyscraper” have made her a internet star, racking up over two million views total on her Youtube page and landing her a guest spot on The Ellen DeGeneres Show.  Her latest musical effort found her tackling British boy band One Direction’s smash hit “One Thing” with fellow Youtube sensations Wellington.  Weston tweaks “One Thing” into her own kind of unique work, making it accessible to not only One Direction fans but also to fans of good music in general.

The original version of “One Thing” is a bit stuffy, where the vocals are weighted down with the glossy, heavy pop-rock production.  The hooks are there, the feeling is there, but the full potential of the track is hindered within the confines of the instrumentation.  Kait Weston’s adaptation fixes all of that.  Instead of crunchy electric guitars, there are dazzling piano keys.  Instead of driving drumbeats, the song keeps its momentum through the crisp, bouncy violins.  The choir-like chant in the bridge is complemented with a sturdy acoustic guitar, adding further emotion to the breakdown.  When the song finally does explode into a rush of power pop at the end, it’s given sufficient enough buildup to bring the track to a powerful close.  Most importantly, the stripped down orchestration gives Ms. Weston the freedom to belt it out, and she certainly lets her beautiful voice shine.  “One Thing” shows that Weston has as much of an affinity for up-tempo pop songs as she does for ballads, and it’ll be interesting to see where the talented young songstress goes from here.  Pick up “One Thing” on iTunes, and check out Weston’s YouTube page as well!