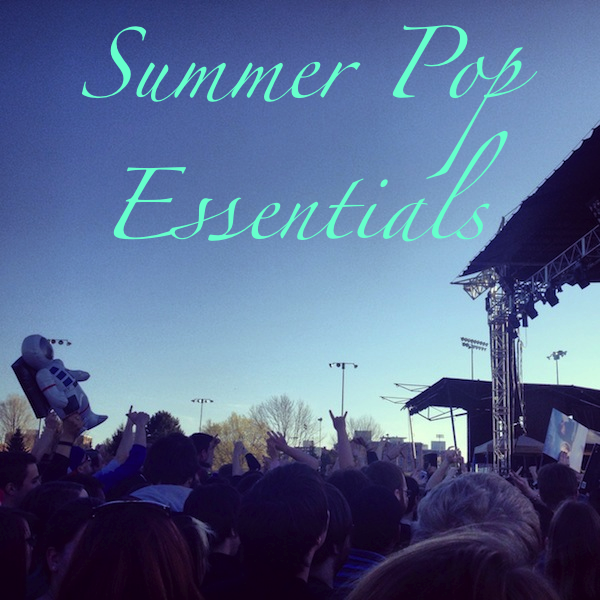 Let’s face it, summer’s nothing without a bangin summer playlist. And with so much awesome music coming out, both on the radio and under the radar, it pays to do some research in order to amass the perfect soundtrack for your summer.

Well, we at State in le Real know that doing just that takes time, and sometimes during the summer we don’t have time. If you’re not interning or working, you’re busy hanging on the beach, going to concerts, or drinking with your friends (or all three if you’re lucky). So we’ve slapped together some tunes that are a must have for any great summer playlist. Some are hot, some are cool, but all of them are definitely worth listening to.

Best known for her high-pitched, autotuned cameo in LMFAO’s “Champagne Showers,” Natalia Kills is a UK pop singer on the rise. She’s been slowly edging her way into the minds and ears of Americans since her 2011 debut Perfectionist, but every hypersexualized electro-blasted single seems to fall just short of being radio-ready and extraordinary. However, it’s looking like she finally stepped up to the plate and hit a home run with her newest single “Saturday Night.” With a humid, synth-driven beat and a story spun from the tears of a lost, hopeless romantic, it’s certainly not what you would call an “upbeat song.” But where it lacks in optimism, “Saturday Night” definitely compensates with its smart 80s groove and gorgeous songwriting. There are some subtle nods to Brandon Flowers and Lana Del Rey in the way Natalia churns out the agony in her voice, and the song as a whole feels like the sparkling neon fog of a drunk Saturday night in the city.

Having just released their debut I Love You, California alt-rockers The Neighbourhood are carving a chunk out of the American airwaves with their dust-covered, brooding love songs. Their current claim to fame is the lead single “Sweater Weather,” a hip-hop tinged, sultry wasteland of pure radio gold. Jesse Rutherford croons through passion and emptiness as he woos his lover, and the tart sexuality clashes with the gloomy guitars and harmonies in a way that’s both stirring and refreshing. The best example is in the hook, as Rutherford’s ominous claim – “it’s too cold for you here” – sounds less like a sneer and more like a come-on. “Sweater Weather” briefly made an appearance on the Billboard Hot 100 a few weeks ago, and expect it to only grow further in popularity. Also be sure to check out the rest of I Love You; the album is about as dark and sexy as alternative rock gets.

Other than a few hap-hazard album fillers and one bomb-ass power ballad (“Turn Your Face”), Little Mix’s debut album DNA is completely made for the summer. Just about every track on DNA is crafted to be fantastic earworm pop, but surprisingly enough, the strongest (and most summery) track is the bonus cut “Love Drunk.” The growling base synth and shuffling percussion meld in with the four UK lovlies’ vocals, and it’s here we see a perfect example of how much Perrie, Jesy, Leigh-Anne, and Jade are adept with trading off lead. The transitions from singer to singer are seamless, and whether it’s the verse, pre-chorus, or chorus, every second of “Love Drunk” is ridiculously catchy. There are ample amounts of strength and buoyancy to the chorus, and the song is one of the sweetest, frothiest tracks to hit the pop world this year.

The dynamic trio of Daft Punk and Pharrell may be already over saturating the airwaves with “Get Lucky,” but within Daft Punk’s newest project Random Access Memories lies one other fantastic collaboration with the hip-hop phenom. “Lose Yourself To Dance” is just as funkadelic as “Get Lucky,” though here we see Pharrell deploying his irresistible falsetto across wooingly sexy guitar chords. The repetition may seem a bit lulling at first, but the chorus itself serves to further steamroll the swing and sway of the track to the point of its mind-controlling rhythm. Daft Punk themselves jump into the latter half of the song with their signature auto-tuned, robotic vocals. This could potentially serve as a follow-up single to “Get Lucky,” so get familiar.

The queen of Tumblr-pop, Charli XCX, has kept her glitter-coated paws firmly planted within the pop music world for the better part of two years. Her songwriting credits and feature on “I Love It” are fueling the track’s world domination, and her own magnum opus True Romance is purring through the headphones of every hipster and rave kid’s jailbroken iPhone. The album has some choice tracks for sure, among them her previously released “Nuclear Seasons” and “You’re The One,” but “Take My Hand” is perhaps her brightest offering. The production could be best described as “video game glam,” with the synthesizers skipping and sputtering like they belong in a Kirby SNES game. And of course, Princess Charli doesn’t miss a beat, gurgling and slurring her way through the song’s euphorically erratic four-minute span.

With a knack for contemplative and melancholy songwriting, you’d think that Dan Smith’s brainchild Bastille would lay within the dark, crunchy, guitar-centered world of British stadium rock. But no, Smith has Bastille out in the sun questioning and brooding, laying the band bare to the radiowaves with some of the best pop production that has been heard in a long, long time. The crown jewel of his project is most certainly the single “Pompeii,” an ode to the monotony of life and the illusion of its changes. Though this certainly doesn’t sound like a day on the beach, it’s the sound that makes it one of the freshest songs currently on the market. Tribal choirs and the behemoth percussion give “Pompeii” the biggest chorus since fun.’s “Some Nights,” and the earworm melodies are bound to make the track just as ubiquitous.

Kelsi Luck’s “That’s What I Like” is more than just one hell of an indie-pop bomb, it’s an indie-pop virus. It’ll get into your head whether you want it there or not, and its bubblegum snap chorus will run itself on repeat until you want to dance in glee and agony. The L.A. singer’s crunchy powerpop anthem with a retro twist has been featured on the trailer of The To Do List, and it’s gaining some pretty steady momentum on Sirius XM as well. It may make Cher Lloyd’s “Want U Back” look like Adele’s “Someone Like You” in comparison, but just because it’s bratty and asinine doesn’t mean it isn’t undeniably memorable.