Chris
Music, Penn State News Reviews and Interviews
Comments Off on Table Ten's now solo Josh Powers releases video for "The Way It's Supposed to Be" 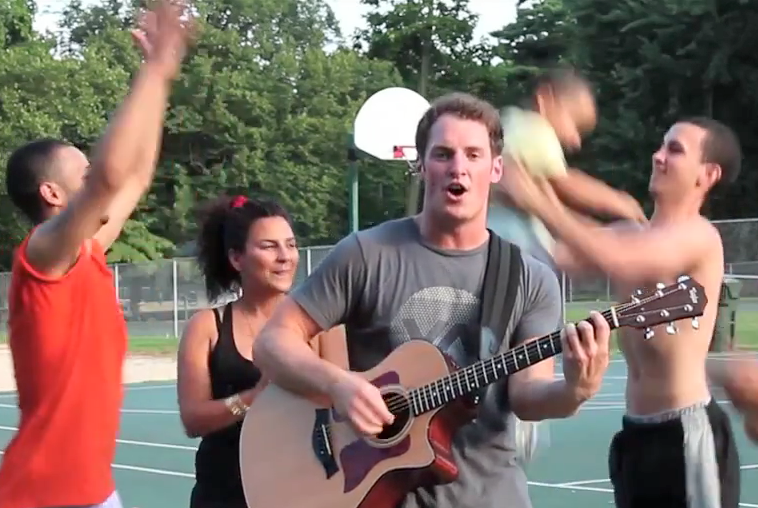 We got the chance to interview Penn State alum and former full-time band mate of Table Ten, who you have most likely seen at one of State College bars and local shows. He has just released a new solo video under his own name – Josh Powers – titled, “The Way It’s Supposed to Be”. Check out our interview with him and his video below.

An interview with Josh Powers

SITR: How long have you been playing with Table Ten and how did you get into music?

I have been playing with Table Ten since 2009, and I got into music sometime around the fifth grade.

SITR: How did you end up in State College, what is your ties to the community and university?

Well I ended up in State College as a student at Penn State. I come from a big Penn State family. After graduating, we spent summers at the shore playing beach venues and then returned in the fall and winter to make a living at places like the Phyrst, Saloon, and the Rathskeller. State College will always be my home away from home.

SITR: Why are you transitioning out of a full-time band into your own original music?

Although Table Ten always tried to integrate original music into our act, it was really our covers that were paying the bills. In order for us to survive doing this, we would have to play anywhere from 4 to 8 times a week, and often in the same market. Then every once in awhile we’d get to play a big, all-original show. We all reached a point where we realized it would be better to focus on those important shows every once in awhile than to keep spending all of our time, energy, and money just to be able to say we only play music for a living.

So what’s happening now is we’re all taking some time to position ourselves in the places we want to be and then from there we’ll see where Table Ten goes in the future. In the mean time, I’m taking this as an opportunity to experiment with my music and just have fun.

SITR: How do you come up with your songs, where does your influence come from?

For me, songs come from all different places. I describe in the video how that particular song came, which was in a dream. Other times it’s just pushing myself to come up with a riff on guitar that is unnatural to play, and repeating it so much that it becomes easy. That’s what happened in the riff for the Table Ten song July.

SITR: If you had to choose one artist to play with, who would it be with any why?

SITR: Have you been collaborated with anyone from the State College music scene at all?

I’m a big fan of Pat Breen. I think he’s really talented on stage and off and I think he’s going to do some big things. We tried making something happen earlier in the summer but it just wasn’t the right time.

SITR: Is it difficult trying to get heard now that are you are starting fresh, how is the Penn State music scene treating you?

Well, to be honest, having the perspective that I have being separated from Table Ten, I am more interested in just having fun with music creating things that I think are cool (songs, videos, albums, whatever). If people want to share in that with me, then that’s great. The video is just my way of reaching out to all of the Table Ten friends and saying hi. My plan is to shoot for 2013 for my first solo album (as long as the Mayans are wrong). If people want to stay in touch with me and be updated they can download “The Way It’s Supposed to Be” at www.noisetrade.com/joshpowers (for free) and enter in their email address.

SITR: Where are you playing your music currently, how are you getting your name out there?

I’m outside of Pittsburgh and trying to get acquainted with the area and the scene while I work out some new songs and decide exactly how I want to present them to the world. First and foremost is just making music that I love, and I think if I just focus on that then more avenues for exposure will reveal themselves down the road.

SITR: Where do you see yourself in 5 years? Any goals for your music?

Just being happy. I have no expectations for my music – I just want to keep creating, collaborating, and getting better.

SITR: Are there any things you would like to make a shout-out about?

Table Ten is opening up for Rusted Root on November 10th at the Palace Theatre in Greensburg, PA and we will be returning to State College to play the Rathskeller after the Wisconsin game on November 24th. Lastly, there is a flying baby in my video at 1:22.