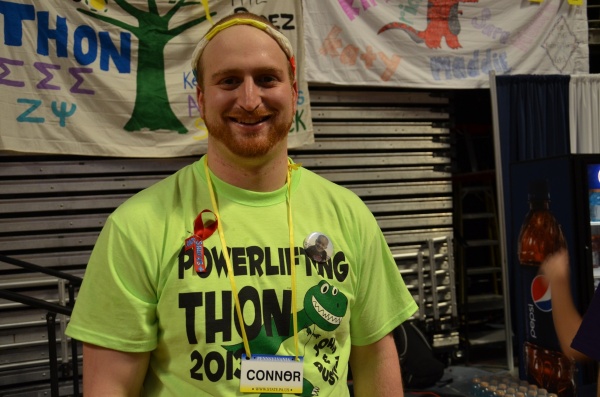 Earlier this weekend, we got an interview at THON with dancer Austin Skobel, a senior here at Penn State.

How’s it going so far?
Austin: I feel great! I don’t know the time, but the music is good so far. 7 Hump Wump was good.

What made you want to get involved in THON?
Austin: I joined the Power Lifting Team freshman year. I didn’t know what THON was until I got here, but when I found out I knew I had to be involved. I’ve loved it here ever since.

What do you think of the music so far?
Austin: I like it. I’m glad they’re playing slower songs early, so that they’re not playing them later in the weekend when I’m tired. I really like the line dance this year too. Last year’s line dance was too far.

If you could have one performer play at THON, who would it be and why?
Austin: That’s hard. I’d say Macklemore because of “Thrift Shop” and “And We Danced.” That’d be awesome. His music keeps me moving.