The Heebie Jeebies + Flashback Forward at The Darkhorse Tavern + (Interview) 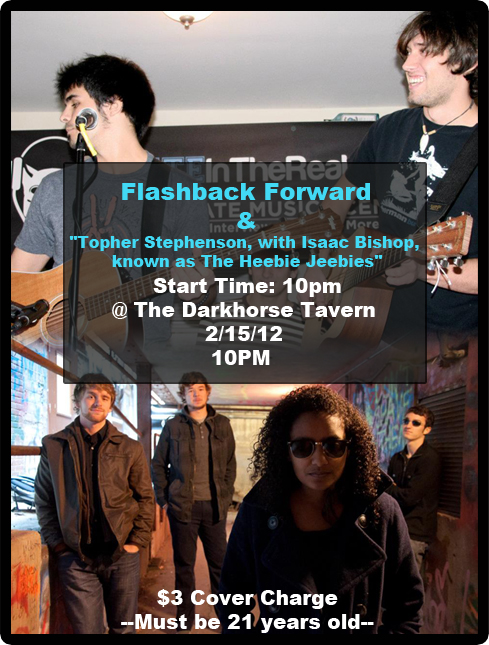 February 15nth.. The day after Valentines Day.. Many people will be in a bad mood because they’ve failed to find a valentine.. Many of you may be upset that your valentine got too drunk and passed out on the expensive date you’d planned. Regardless, we’ve got the perfect way for you to beat the V-Day blues!

Come out to The Darkhorse Tavern and listen to the soothing sounds of Topher Stephenson and Isaac Bishop, known as The Heebie Jeebies, followed by the up and coming PSU locals, Flashback Forward! After this show, your valentines day shenanigans will be a distant memory. All the info you need is on the picture, but heres the event page if you’d like to make it facebook official.

Want a taste of what you’ll hear? Have a listen to Topher’s FREE ALBUM

And take a look at the facebook page of FLASHBACK FORWARD

Last but certainly not least, check out State In The Reals exclusive interview with Flashback Forward about their music and the upcoming show!

SITR: Give us some background on the band. How did you meet each other and start making music?

FF: Well Aida (lead guitar) and Elliot (drums and general destruction) actually met on a Facebook group and decided to jam together with one of Tyler’s (vocals and keys) friends, Dan. My friend then invited me to start jamming and the four of us became a pretty solid unit until Dan, our previous bassist, decided to leave because he wanted to play a different style of music. Then we asked our friend Zach (bass) if he wanted to come and play bass guitar for our band and because he is super smart he accepted the offer.

And there, in that magical moment, a band was formed.

SITR: How did you decide which direction to take the music?

FF: Haha, well quite frankly the direction found us, we just started jamming and it we naturally played a more alternative rock style and so we grew off of our instincts.

We create our music in this place we call the Batcave (none of us is really too sure why it’s called that). But, yeah, in the Batcave there’s usually a lot of noise and then out of that come some really beautiful things. It’s organized chaos and a lot of hard work. Figuring out our musical direction is something that we fight over from track to track because no two are really the same. Oh and then there’s usually a fair amount yelling and punching and then the music comes out the other end.

SITR: Any significance behind the name?

FF: Any significance behind the question? Who knows? If we remember right it’s an acronym so secret that none of us knows the meaning behind every letter. We tried to piece it together once but that almost broke up the band so we decided that, like politics, it should never be brought up again.

I think at one point or another we all though it meant something else, then we wrote it down, and then we lost that piece of paper.

Let’s settle by saying that we think that Flashback Forward is an episode from ‘Lost’ that we really like. Or it’s this phenomenon that happens when you play a board game and get trapped in a jungle until someone rolls the dice again. Oh, wait, that was Jumanji….

SITR: What are the main inspirations for your music?

FF: Coldplay, U2, The Killers, Britney Spears and the whole Justin Bieber catalog. Oh, and the Beatles, who were these really cool dudes from England.

SITR: You guys gave a great performance at the PSU Songwriters Club THON Benefit Show! How did you get involved with the club?

FF: Thank you!!!! Yeah, it was a lot of fun, and it sounds super generic but THON is an amazing cause and we like that we were able to contribute to it. Tyler knew Kyle Ennis (who is part of the executive board for the club) from being in te same classes and we all roam in similar circles and the next thing you know Kyle invites us to play after watching a show at the Break Zone.

SITR: What can you tell us about your upcoming show at The Dark Horse on Feb 15th?

FF: It should be a fun show. We’ve got Topher Stephenson, who is really pretty awesome (go stalk his YouTube) kicking things off at 10 and we’ll be on right around 11. We’re playing a couple covers in addition to a few originals, and we’re toying with the possibilities of a few mash-ups, so we guess you’ll have to come see for yourself.

SITR:  Can we expect any other big things from Flashback Forward for 2012?

FF: Unless one of us gets pregnant, it’s going to be the EP, and a couple shows in the Big Apple that we’re lining up as well as a few shows in State College. We love performing. We’ve already had the chance, the blessing really, to record at the Engine Room as well as with individual producer/mixers all of whom have been extremely talented. It’s been amazing to be go and record at the same place as The Killers and G Unit and really be able to push the boundaries on your limits as a band.

Our Facebook page is the place to go. We announce everything that’s upcoming on facebook.com/flashbackforwardand, yes, this is a shameless plug.

SITR: What do you think of the PSU Music Scene?

FF: It’s growing, and changing, and for the most part it’s like a Hydra. For each problem you tackle, two more pop up, and changing this culture of constantly listening to covers is not easy because it is familiar. You can listen to any cover band and as long as they aren’t horrendous they’re fun to watch just because you can sing along. When the music isn’t familiar to you it is a lot harder to get the same immediate satisfaction but there is a different satisfaction that comes from discovering a new band you like and that is what we hope the music scene will transform into.

We want to be able to play for people open to falling in love with new music and that’s the direction we hope things are moving in.

SITR: What advice can you give to other students trying to do music and school at the same time?

FF: It’s all about enjoying it. If you enjoy the music you are playing and writing it is super easy to make time to practice and the more you practice the better your sound and music will turn out, so find a group of people who like to play the same style of music and then just let nature take it’s course.

We’d say keep at it and try to keep it balanced. It’s a steep learning curve and there are a lot of moving parts. We’re fortunate to have the friends we have because they’ve been right there with us. And the audiences we’re seeing are growing in size bit by bit which is awesome. Each show we see new faces and that only makes us want to keep doing what we do. I mean, if you have family and friends who push you forward, embrace that and write amazing music.

If you don’t have that support, embrace it either way, and write amazing music.