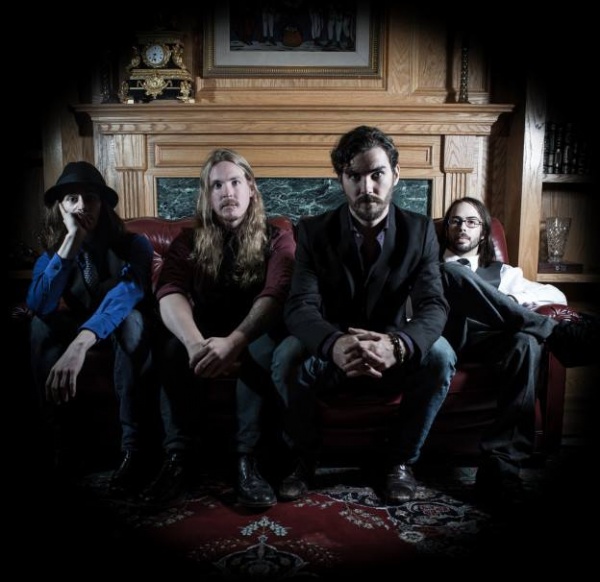 Trophy Scars is a four-piece experimental rock/blues band originating in Morristown, New Jersey. Since their inception as a post-hardcore group in 2002, they’ve gone through several line-up changes, as well as a few drastic alterations in sound.

Their latest effort, the beautifully orchestrated, thematic Holy Vacants, was originally intended to be the band’s final effort; an epic coda. But what was initially expected to be their farewell release, instead morphed into a launching-off point of sorts, opening doors for the band that they once thought were soon to close. As vocalist/lyricist Jerry Jones stated, “When we started doing all the pre-production on Holy Vacants, we realized how much more we had to investigate in ourselves and what we were capable of.”

It’s been nearly three years since Trophy Scars’ last release, their Never Born, Never Dead EP; an exquisite half-hour slice of neo-psychedelia drenched in lysergic blues, which was triumphantly referred to by critics as “the kind of record that can make you believe in music again.”

Never Born, Never Dead, along with 2010’s Darkness, Oh Hell EP, was an assertive departure from their previous works, both musically and conceptually. Never Born, Never Dead focused on the cyclic nature of love and existence; employing reincarnation as its main lyrical theme, reaching far beyond the scope of their past albums, most of which were glaring accounts of turbulent past relationships and the physical loss of loved ones—sometimes cloaked in easily discernible metaphors, other times not—that vocalist Jerry Jones endured.

Never Born, Never Dead’s narrative revolves around the souls of two lovers fixed in time who have discovered the secret to life; that it never starts and it never ends. After bodily death, their souls reincarnate into a different body at a different point in time. The couple spends entire lifetimes trying to find each other once again, only to die, be reincarnated, and forced to start the search over; each song on the EP is seemingly representative of a different lifetime.

Hailed by critics as one of the best albums of 2011, Never Born, Never Dead may have left many wondering where Trophy Scars could go from there. Had they perhaps reached their apex? Holy Vacants answers that question simply: no, they have not.

Holy Vacants finds Trophy Scars borrowing sounds from a range of disparate genres, cultivating their own unique blend of progressive rock, classic blues, and a pinch of their post-hardcore roots crushed up and cut into the mix.

While Never Born, Never Dead traversed the idea of everlasting life through reincarnation, Holy Vacants explores the finite nature of existence, and how to combat it; in this case, through means of mercilessly slaughtering angels in an attempt to procure and drink their blood which contains the key to the fountain of youth, allowing the imbiber to not grow old and live forever.

Like its predecessor, Holy Vacants plot centers around two lovers. But instead of endlessly searching for one another in time, the renegade couple in Holy Vacants spends their eternal life cannibalizing angels and drinking their blood to stay young and in love forever.

The entire album is written with such careful detail that—coupled with the explosive, rock-opera-esque theatrics of the instrumentation—it almost feels as though you’re watching a film; which is befitting, as the album’s concept was adapted from  a 35-page screenplay written by Jerry Jones.

The brooding, post-rock intro track “Extant” kicks off the story in medias res, with Jones singing, “You were feasting on the body of an angel in a taxi cab / though the driver was scared / we paid him not to care.”

The gloomy opener transitions seamlessly into the overdriven “Qeres”, which again finds Jones utilizing his hyper-vivid writing style—which remains present throughout the entire album—singing, “Every angel inside your gut / Aching for your soul to suck / Screaming for their bodies back / In your digestive tract” with a croon that’s reminiscent of a frenzied Tom Waits.

The rest of the tracks on the album lie comfortably between bombastic, sleazy prog-rock and old fashioned blues; slowing down at times for songs like “Archangel” or “Everything Disappearing”. The album comes to a close with a short reprise sung entirely by vocalist Gabrielle Maya Abramson.

Holy Vacants will be available digitally and in stores April 21 in Europe and May 6 in North America, via UK-based label Monotreme Records.