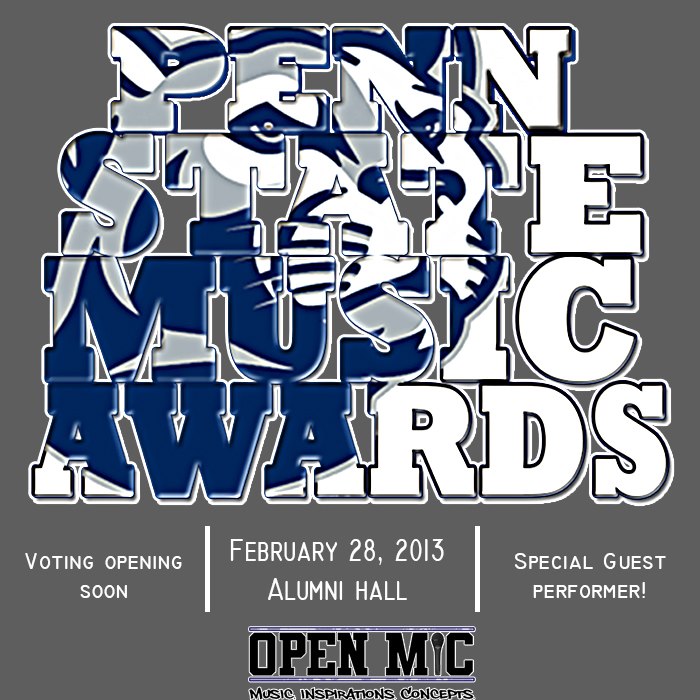 The Penn State music scene has really taken on a new shape over the past couple years. What was once a collection of extremely talented individuals, working underground and often going unnoticed, now seems to be a thriving network, brought to the forefront of the Penn State community by the efforts of various arts and music centered organizations. We at State In The Real couldn’t be happier with the progress that we’ve seen in Penn State original music, the fact that other Penn State news organizations finally seem to have an interest in covering it (when they feel it’s necessary,) and the work that we’ve seen other Penn State music related orgs put into that growth.

In moving towards that same goal, Open Mic Penn State, a fresh face to the world of Penn State music orgs, is pleased to bring you the Penn State Music awards! The organization was founded by Rolanzo White, Cameron Jordan, and others who sought to bring more representation to urban genres at Penn State.  “The Penn State Music Awards is our way of recognizing and rewarding the efforts and achievements of all Penn State Musicians for this last school year,” says Rolanzo.  “We will have numerous categories for students to be nominated for their hard work. Nominations are open now until early to mid January. Shortly after we will be releasing the nominees for each category.”

For those of you who are not familiar with Open Mic Penn State, they hosted a rap battle as well as a holiday jam towards the end of this past semester that were both great events featuring some terrific artists. The official award ceremony will be held on Feb 28th, 2013 at Alumni hall with a special guest performer closing the show. We’re certain it will be an awesome time, so expect to see us there covering the event!

You can go nominate your favorite Penn State musicians here!