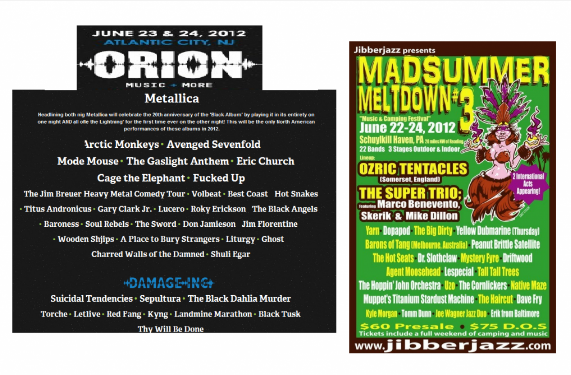 Madsummer Meltdown #3 in Schuylkill Haven, PA (right by Reading) features 22 bands on 3 outdoor and indoor stages this weekend from Friday the 22nd to Sunday the 24th.  There is a new musical madness improv stage, numerous solo-artists from all across the globe, activities, light shows and fire performances, food and craft vendors, yoga and much more.  It’s only about 2 a half hours away from State College and tickets are only $60 online and $75 at the gate for a weekend of camping, music, and good vibes.

Metallica presents the diverse Orion Music and More Festival on this weekend on Saturday the 23rd and Sunday the 24th in Atlantic City.  They will perform an entire album each night: their 1991 release “The Black Album” and 1984’s “Ride the Lightning.”  Some other headliners include Avenged Sevenfold, Modest Mouse, Arctic Monkeys, Suicidal Tendencies, and The Black Dahlia Murderer.  There are also comedy acts by Jim Florentine and Jim Bruer.  There’s even a touch of country, Eric Church!