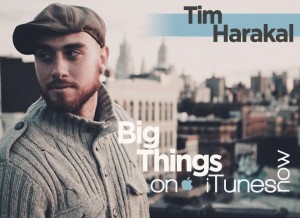 Tim Harakal is a prominent singer-song writer hailing from the Lehigh Valley. Tim and his producer, Jules Gavin, have been tickling the ear drums of PA music fans for years, and now with a brand new LP under his belt, his music is spreading throughout the east coast. With a unique brand of song-writing, and a live performance that demands attention from anyone within ear-shot, Tim Harakal is climbing his way to the top. If you have any appreciation for acoustic tunes, you can’t miss out on this guys music.

Check out the video for his new single, Save Me

AND, go grab his new LP, “Big Things” on iTunes, and check out his website to hear some delicious tunes http://www.TimHarakal.com

SITR: When did you first start writing you own music?  What drove you to pursue it as a full time career?

Tim: I started writing originals my Sophmore year at Kutztown University, and I recorded them shortly after in my dorm. After I had enough songs recorded I threw them on what was the cool new thing…Myspace. To my surprise I started receiving emails asking if I had a CD for sale. I didn’t want to say no so I made a CD and started sending it out. I had my music playing in Tokyo, Australia, Germany, and all over the US…which ultimately led to me dropping out of college with the idea of playing music for money. That was what started it all…Myspace.

SITR: You and Jules Gavin put on an incredible show, and have put together an amazingly unique album, “Big Things”..How did you guys meet/decide to collaborate your efforts?

Tim: I dated Jules sister for a while.. he hated it, but since I was around so much and us both were musicians, we were bound to jam. One day after a metal jam session in Jules basement I hesitantly approached him with my acoustic CD… I’m sure you know, being a musician yourself, that when you first present your music, especially originals, to somebody you expect the worst.. But he was best drummer I knew so it was worth a try. Despite my reservations, he actually dug the music and soon after bought a Djembe (hand drum). We have been rocking harder since.

SITR: After writing over 40 original songs, how did you decide which ones to put on your first official LP?

Tim: Unfortunately music at its roots and marketing don’t always go hand and hand. What I mean is that I play music because it makes me feel good and I have certain songs I like to play and listen to more than others, but being marketable is about playing music that makes others feel good… Which in turn makes me feel good, but in a different way. We took note of what songs were received best at the shows, talked to the fans and listened to the radio. Then we just put the songs that met that criteria on the album…Bam.. Big Things!

SITR: What artists do you find inspire you the most? How do they help you shape your unique sound?

Tim: I really enjoy listening to Jason Mraz. I think I get the willingness to experiment lyrically from him. He seems to have a lot of fun when he writes… Its simple, but thought provoking. On the flip side I listen to tons of metal. Meshuggah, Metallica, Lamb of God, and Pantera just to name a few of the bands that have influenced me from that genre. I think metal gave me the precision and the unique rhythm quality some say they can hear in my music, but on the other hand I have always been a meticulous kind of guy for whatever reason. Hmm, there are way too many people that have influenced me musically. I don’t mean to get too philosophical or change the question and no I am not “high”, but lets say living and interacting with people is an art in itself… That would make everybody an artist, and would make anybody I interact with qualify as an answer to this question. Lets go with my artist Mother, and the delicious food she makes.. That influences my music the most.

SITR: Where would you say is your favorite place to perform in the Lehigh Valley? Also, what are some pros and cons of being a musician in the area?

SITR: Now that you have a CD out, what is next on your to do list? Anything specific planned for 2012?

Tim: We are working on getting in front of more people. So, touring to expanding my fan base is the main focus for this coming.

SITR: You’ve been in the shoes of a college musician before, what advice can you give to PSU students who are trying to juggle music and school?

Tim: Never force music. When a song wants to be written you need to drop everything, dive in and let that song be born, but forcing it usually stunts the creative process. The moment you get out of your own way is when the good stuff starts to happen…know what I mean jellybean?