A letter to the NCAA from Co-Founder Matt Andersen 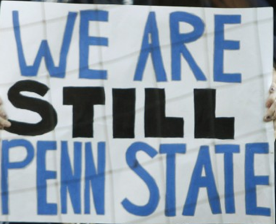 Here is a letter to the NCAA from SITR co-founder Matt Andersen.  Please share with your friends, family, and anybody who cares about Penn State.

Before making the decision to condemn all of the Penn State sports teams with your “death penalty,” please consider the following.

If these players lose their scholarships, many of them won’t be able to afford college, and will be forced to transfer schools away from a place that they love.  Imagine if you were just offered a full scholarship to play at the Pennsylvania State University.  Imagine that it has been your dream, your entire life, to play sports at Penn State.  Imagine that you know it’s your only shot to get a college degree.  Imagine that being ripped right out from under you, for something you didn’t even know about until November.  My life would be shattered.