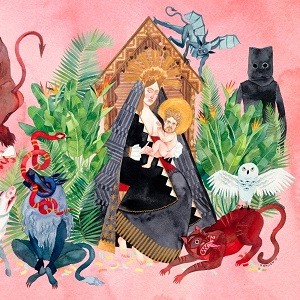 Wacky, witty, woeful and everything in between– Father John Misty shows every side on his sophomore effort, I Love You, Honeybear. Father John Misty, a.k.a. Josh Tillman, moved to Seattle in 2004 to pursue a career as a singer-songwriter before joining acclaimed indie-folk band Fleet Foxes as a drummer in 2008. He later decided to leave the band in 2012 after the release of their second full-length Helplessness Blues as he felt his time touring with the group was detracting from his ambitions as a solo artist. Later he released his first full-length album as Father John Misty, 2012’s Fear Fun, a stark departure from any of his previous solo work. Tillman explained his re-creation of himself as Father John Misty as a desire to produce music that included more of his conversational self and sense of humor. On Fear Fun, he produced a psychedelic and folk medley that detailed his “weird-ass experiences” while writing a novel. Now, with I Love You, Honeybear, he brings forth a seemingly mature, raw and emotional album that still manages to utilize the perfect amount of dry humor and cynicism that keeps it from ever sounding like a dull confessional.

With the opening and title track, “I Love You, Honeybear,” Tillman immediately delivers a beautifully crafted ballad chock-full of a variety of instrumentation including a full assembly of strings, piano, guitar and drums. Immediately after, he launches into the percussion-heavy “Chateau Lobby #4 (in C For Two Virgins),” chronicling sweet memories of his early adventures with his wife Emma. The song keeps it interesting through the use of a mariachi-esque trumpet and a traditional folk vibe. And the album continues from there, delivering a fresh sound with every track. “Nothing Good Ever Happens At The Goddamn Thirsty Crow” tries out a mashup of jazz, blues and country. “When You’re Smiling and Astride Me” plays with backing vocals reminiscent of an R&B/soul tune. “True Affection” makes ample use of brilliantly-matched vocal harmonies and, a bit surprisingly, a synthesizer and a pop beat. And, perhaps one of the most impressive tracks on the album, “The Ideal Husband” blends a swing drumbeat with a fast-tempo rock and roll chorus.

It is important to note, though, that Honeybear displays more than just musical prowess. Tillman’s lyricism helps tie all the tracks together, so that the record reads like a concept album, a fantastic story of Tillman’s personal life in its current state and his feelings and frustrations, as well as his relationship with his wife. Tillman cements his status as a delightful smartass, using sharp-as-a-tack wit and sarcasm on songs like “The Night Josh Tillman Came To Our Apt.” to critique his marriage, before using the same clever songwriting to turn a critical eye to himself. Tillman leaves no stone unturned as he discusses married life, encounters with women in various places and situations, and his sexual and romantic relationship with his wife. On his first single and a standout track, “Bored In The USA,” Tillman paints a lyrical landscape involving what is somewhat of an existential crisis. He counters raw confessions about frustrations of being stuck in a malaise and disenchanted with life with a jarring laugh track, reportedly to “neutralize uncomfortable ideas.” “How many people rise and say/ ‘My brain’s so awfully glad to be here/ For yet another mindless day?'” he asks, and though it sounds a bit glum, it is one of many delightfully raw and personal lines, making “Bored In The USA” and unforgettably bittersweet ballad.

Overall,  I Love You, Honeybear shows a mastery of both musical skill and lyrical craft, an example of a carefully-developed sophomore album that shows growth from its predecessor, Fear Fun. Father John Misty blends nostalgia and introspection, witticism and intimacy all set against a delightfully interesting musical backdrop. The final track, “I Went To The Store One Day,” ends the record as a concept album should be ended, with a sense of reflection and soulful resignation as he recalls first meeting his wife. The song is melodic and sweet and going back to the start at the end makes the album feel almost circular. I Love You, Honeybear is at times weird, at times touching, but overall is a can’t-miss album that beautifully balances fury and frustration with affection and charm.