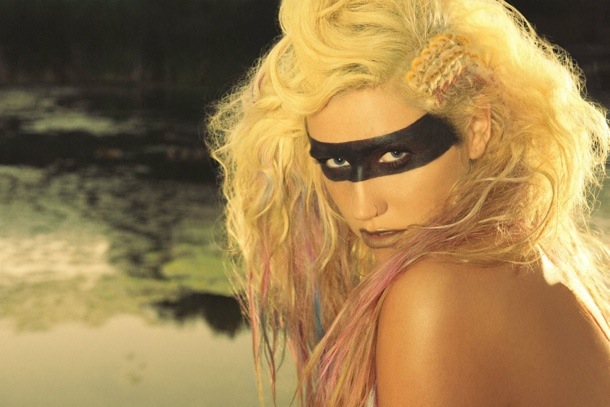 When you think of musicians that take themselves seriously, Ke$ha is probably the last person that comes to mind. The glitter-stained, makeup-smeared pop diva detonated the charts in 2009 with her sassy breakout hit “Tik Tok.” This autotune-laden party smash gave a pretty substantial first impression for the California-bred singer/songwriter. It delivered as an instant #1 hit, and its video depicted Kesha Rose Serbert as a scraggly, sexy, hot mess, emerging from a bathtub and moving on to take the streets of LA. What seemed like a lucky one-hit-wonder at the time expanded into an entire new facet of dance music, as Ke$ha congested the airwaves with hit after hit of infectious, icy, sexual rap-pop. Three years after Ms. Serbert first seduced the country with her glitter and grace, she’s set to drop her second full-length album and third release, Warrior. 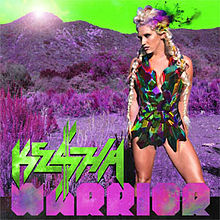 Think of Ke$ha’s progression from Animal to Warrior as a kind of metaphysical evolution. Ke$ha began as an Animal, crawling around the undergrowth of mainstream pop on all fours. She craved the fresh meat of the American public, snarling as she clawed her way to the top of the charts. Four massive top 10 hits gave her enough confidence to stand upright, but not enough to shed her animalistic image. So, she became a Cannibal. Bloodthirsty on the dance floor, she devoured our hearts and minds with her lustful dance drops and slick hooks. Tack up two more huge chart-topping whoppers, and Ke$ha finally obtained the strength to mold herself into a full-fledged pop goddess. At last, she stood strong and proud as a Warrior, leading her army of fans (dubbed “Animals”) to the top tiers of musical stardom, surrounding them with strong inspiration and even stronger breakdowns.

Where Animal and Cannibal were chaotic takes on your typical, churn-out-as-many-hits-as-possible pop albums, Warrior is more focused, refined, and much more polished. It’s a pop album, yes, but it’s a pop album with some serious substance, something you wouldn’t normally expect from Ms. Serbert. It’s 12 tracks that teach us that when it all comes down to it, life is about taking the risks, chasing the dreams, and destroying the dance floors. It’s about living like animals, but more importantly it’s about conquering like warriors.

The title track and opening to Warrior is a perfect indication of that sentiment. It’s a club-crunching house anthem, the aggressive beats driving Ke$ha’s live-here-and-now lyricism home. Once the second chorus erupts into the bridge, the entire song crumbles into a hedonistic pit of passionate dance euphoria, rushing and breaking with such velocity that it makes you want to throw off your clothes and start a dance party on the spot (or maybe that’s just me? Anyway…)

Next up is “Die Young,” the lead single to Warrior and arguably Ke$ha’s best radio hit to date.  Ke$ha builds the track around a parade of acoustic guitars, adding a synth-heavy dance breakdown that gives “Die Young” the perfect four-to-the-floor club-ready atmosphere. What really takes “Die Young” to the next level is the chorus, as theatrical fun. frontman Nate Ruess flexes his impressive songwriting muscles and guides Ke$ha to the track’s earworm refrain.

You could say that “C’mon” is a more synth-centered leadoff from “Die Young,” as Ke$ha continues with the lyrical theme of being caught up in a dirty crush in the midst of a dirtier dance party. The choral harmonies at the song’s opening transition into a cleverly produced dance sample, as Ke$ha adds some quirky wordplay into the verses. The album’s executive producer, Dr. Luke, bumps up the generic dance sound with some wub-heavy touches, spritzing in dubstep at intermittent points of the song.

“Thinking Of You” vibes off of pop-rock production, breaking off every so often into more abrupt cuts of dubstep-influenced synth burps. The break-up track takes cues from Ke$ha’s old fan-favorite, “Kiss N’ Tell,” adding lyrical middle fingers in between Ke$ha bragging about her Grade A, rock star lifestyle. In comparison to the previous three tracks, “Thinking Of You” dips a bit in accessibility. But even if it isn’t quite as catchy as its predecessors, it’s still a pretty solid record.

“Crazy Kids” sits primly near the album’s middle, bringing together every element of Ke$ha’s artistry in less than 4 minutes. The chorus kicks off with an acoustic pop flare, bright whistling giving way to thudding house percussion. Ke$ha brings together all of her animals in the chorus, knighting them all as the “crazy kids” and praising their wild youth. The acoustics suddenly switch to a bass-heavy hip-hop beat, and Ke$ha delivers a flow that outshines any of her past rap attempts (yes, even “Sleazy”). This is the kind of music that Ke$ha was born to make: undeniably party-friendly, but with a message that doesn’t come across as forced or sappy.

It’s not until “Wherever You Are” comes on that we meet our first album filler. This is a standard mid-tempo house track with heartfelt and cheesy lyrics, and where we find Ke$ha surrounded in the kind of music she’s familiar and comfortable with. Soft keys meld with the house chorus, and there’s a kind of emotive half-hook to the refrain. It’s breezy pop, good for those summer car rides or to pass the time walking between classes. But when put side by side with other tracks in the album, it serves only as a transition from the blatant dance-pop of the past five tracks into the rock-driven sound of the next three tracks.

Veteran punk-rocker Iggy Pop jumps on to “Dirty Love” to join Ke$ha in a romping pop-blues track, bursting with energy and attitude. Ke$ha laces her voice with a light dusting of distortion, emitting a melodic growl as she eschews romance and commitment for casual sex. “Dirty Love” calls to mind a slightly less focused, poppier version of The Black Keys’ “Lonely Boy,” particularly with the way the chorus progresses. Just the same, Ke$ha nails this diverse sound with surprising audacity.

“Wonderland” features the production talents of Black Keys’ drummer Patrick Carney, flaunting yet another new genre for Ke$ha. Much like Lady Gaga’s “Speechless,” “Wonderland” is a piano-led slice of retro-tinged alternative rock and a side step for the pop star. It’s a steady, soothing tune, organs ringing in the background as Ke$ha immerses herself in the nostalgia of her pre-fame days. She thrives amongst the organic production, and as the track ends it begs the question: what would a country-rock Ke$ha album sound like?

“Only Wanna Dance With You” sounds too much like Avril Lavigne to be ignored. Even if that’s not necessarily a bad thing, the easy comparison takes away from the track’s remarkable quality. The record features The Strokes’ frontman Julian Casablancas, and though his feature in the bridge is painstakingly brief, the track as a whole bounces along with the same kind of sunny rock that made The Strokes such a sensation. The pre-chorus sounds similar to Avril Lavigne’s “Complicated,” and as Ke$ha effectively captures the catharsis in the chorus, she does it in a very Lavigne-esque way. Again, this isn’t as much of an indictment on the track itself, it just may turn some fans off who would like to keep separate their Avril and Ke$ha records.

“Supernatural” plays out very much like the title track, with Ke$ha exhibiting strong vocals in the chorus, brawny dance instrumentation in the verses, and an unruly drop in the bridge. Ke$ha allegedly admitted that the song was about an intimate encounter she had with a ghost, and this is where we thank the gods for Dr. Luke. He helps Serbert mold her otherworldly encounter around heavily sexual songwriting, and as such turns “Supernatural” into something close to relatable. Instead of focusing in on the ghost itself, the lyrics suggest that Ke$ha could have just as easily had a wild one-night stand.

The final two tracks, “All That Matters (The Beautiful Life)” and “Love Into The Light,” fly straight out of the 80s. “All That Matters” is disco-fed house to the core, and could very easily have fit within the spate of tracks seen in Cannibal. “Love Into The Light” flows like magma, a thick, burning slow-jam that finds Ke$ha ending Warrior on a giant, epic and motivational note. She lays out her flaws while simultaneously embracing them, using herself as a model to live how you like and to focus on the positives.

Make sure to pick up the album when it drops tomorrow, and celebrate a whole new level of pop perfection for this gaudy dance queen.