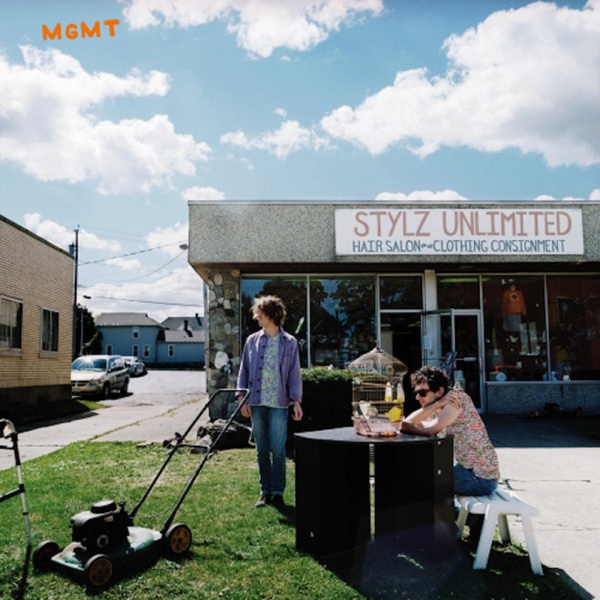 We find simplicity on the cover of MGMT’s newest album.

Andrew VanWyngarden and Ben Goldwasser are seemingly displaced in a basic looking neighborhood. Their feet are on the ground, as the letters MGMT float in the sky, intangible amongst the clouds. The sun shines on their rainbow pixilated shirts – the same image found in the innards of the album book and physical CD.  This is MGMT’s self-titled album.  It’s as colorfully complex as their shirts, as intangible as their name floating in the sky, and it’s as simple as that.

“Alien Days” is the first of ten tracks and one of few that actually holds any real structure. Despite its eerie beginning of a child’s voice singing, it’s a clear hit and grasps enough attention to want to continue on the psychedelic journey that is MGMT’s third album. The awkward, yet stylistically intriguing pace is set from the start with “Alien Days” and stumbles on through the rest of the tracks, carrying along various degrees of distorted backgrounds, psych-rock synths and a clutter of videogame-like sound effects.

“Your Life Is A Lie” is a single that came out in early August, and a statement full of curt lyrics and forced rhymes. The life-is-not-as-great-as-it-appears message from MGMT is contradicted and warped with relatively upbeat instrumentals, broken up throughout with patches of glitches and distortions.  The density of this song is apparent in the rest of the album, as each song is packed full with its own weirdness, from the atmospheric soundscapes of “A Good Sadness” to the rhythmic glossy-pop beats of “Plenty Of Girls In The Sea.”

MGMT is an ambitious kaleidoscope of sound that may be claustrophobic at times, but brilliant at others, and all in all a risk taken in a positive direction.