A lot has happened in eight years, we have had a new president (who has been reelected), there have been like 6 new iPhones, Tom Brady won another Super Bowl, Peyton Manning left the Colts, two Olympics, and no Modest Mouse albums. After a long, long hiatus, the band that brought us wonderful hits like “Float On” and “Dashboard” are back, and they have come back with a heartfelt tender album. No for those unfamiliar with Modest Mouse, the band first burst onto the scene with the hit “Float On” debuting in what I call the “Golden Summer of Alternative Rock” that Summer also seeing the releases of “Somebody Told Me” by the Killers and “Take Me Out” by Franz Ferdinand. I became hooked on the rock song with depressing lyrics. It wasn’t until later that the band really caught my attention, I thought that they would be a one hit wonder, and “Dashboard” made me an honest to goodness fan of the band. With the announcement of their new album, their first in eight years, I got to say I wasn’t too excited. In fact I sort of avoided hearing any news from the band. I had lost interest in the band, they hadn’t done anything in so long that I became tired of hearing the same songs again and again. But I went home and listened to the always on point Alt. Nation on Sirius XM, and really enjoyed the first single “Lampshades of Fire” and started to pay a bit more attention to the band. When they released the music video for “Coyotes” they not only captured my ears, but they also won my heart. So much emotion was in the music video and it was just a great way to really get my attention for a new album, yes I love dogs that much. But was all of the hype and build up worth it?

First off look at the album art, no really look at the album art. It is absolutely gorgeous, it may be simple on first glance, but when you hold the physical copy in your hands and open the case it becomes something special and it really is a piece of art that you are holding in you hand. The opening track starts off with the traditional Modest Mouse sound that we have come to love and expect from the band. It is a tender vocal with harsh clashing sounds. It is disjointed to the point of perfection. The songs find a nice way to really flow into one another and create such a rich, whole and complete sound that is really missing in most modern albums these days, where every song sounds like a single, and the album doesn’t have a cohesive flow to it. With Strangers to Ourselves Modest Mouse creates an album that takes you on a musical journey that makes you appreciate how influential Modest Mouse is in the alternative rock world. Isaac Brock’s vocals make the band who they are but, he alone couldn’t make this album what it is. The variety of instruments used in the album make it really stand out, sometimes the album feels like an 80s rock opera, and at others it feels like an early 2000s alt. rock escape album. Modest Mouse stays true to their roots on this album and brings their sound from their older albums, but they also show their maturity and evolution as a band on this album, from experimenting with vocal distortion, to change of pace. The album brings something for all fans of music and Modest Mouse. 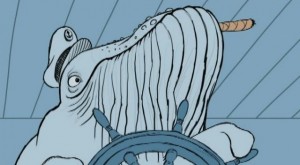 Heath Ledger, a friend of the band, directed the music video for “King Rat” back in 2007

Evolving from We Were Dead Before the Ship Even Sank but staying true to their roots, Modest Mouse is back in action with one of the most powerful, and perfectly constructed albums of the year, and it will be hard pressed for anyone to not include this in a top ten list of albums at the end of the year. Strangers to Ourselves is the perfect title to a band, that has been out of the public eye for so long, and with its release it is like we are discovering Modest Mouse all over again.