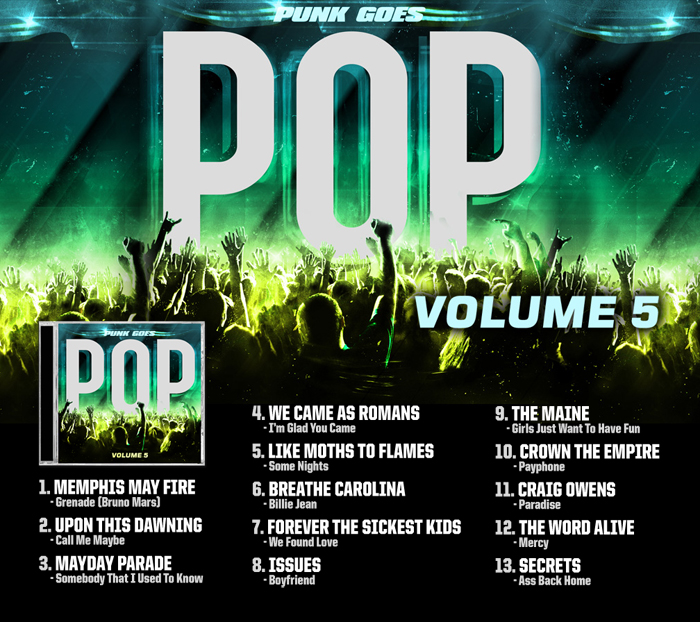 Since 2002, Fearless Records have been releasing albums that bring the punk world and the pop world together as one. These records, titled Punk Goes Pop, consist of a multitude of punk and alternative bands covering popular radio hits. The concept of the Punk Goes Pop albums is genius, because to me, the moment a band plays a cover at a show is the moment when the entire audience connects. Whether you came to the show for that band or not, once you hear the tune of a recognizable hit, you and the entire room now share something special. Every edition of Punk Goes Pop captures this so well, and the bands showcased in each release truly bring this magic to CD form.

As stated before, all of the Punk Goes Pop albums showcase punk/pop-punk/alternative bands covering the most current pop hits, as well as the classics. Michael Jackson, the Backstreet Boys, and Carly Rae Jepsen are just a few of the pop artists whose songs appeared in the newest rendition of the well-known and loved compilation.

The latest installment of the Punk Goes Pop compilations is set to release on Tuesday, November 6th. Our friends at Fearless however, sent us over the album a little early for review (shout-out to my girls Heather and Julie!)

Before actually listening to the album, I looked at the song list that Fearless posted on the Punk Goes Pop website. Truth be told, I was actually shocked at some of the choices bands made with their covers. While some songs clearly fall under the category of “pop,” other songs were popular on the radio to me, but not what I would think as pop music (but I digress). Let’s get to it shall we?

I actually really hate Bruno’s version of this song, but Memphis May Fire really allowed me to appreciate “Grenade” a little more than I had before. I caught a couple Memphis May Fire sets at Warped this past summer, and this song might be the best I’ve heard Matty Mullins sound. The breakdowns and the heavy drums weren’t overbearing throughout the track, and Memphis May Fire allowed the cover to maintain the original sound of “Grenade.”

As soon as Fearless released the statement that another Punk Goes Pop album would be dropping in the near future, I knew this song would be on it. I’ve personally never listened to Upon This Dawning before, and so I had no idea what their sound was like prior to this cover. However, this was one of my favorites from the album because it showcased Upon This Dawning’s true sound, while also creating the perfect “Call Me Maybe” mix. I loved how well they balanced the two different genres without losing themselves in the cover.

Mayday Parade ft. Vic Fuentes – “Somebody That I Used To Know” (Originally performed by Gotye)

My absolute FAVORITE cover from the album. It might just be because I love Mayday Parade and Vic more than life, but after listening to this song so many times, I think they absolutely killed it. Both Derek and Vic’s voices on this track gave me chills. Not only that, but I loved that Mayday didn’t use synthesizers or any other additional add-ons to create the music for the song. This cover showcased Mayday’s recognizable sound and almost sounds like it belongs on their latest self-titled album Mayday Parade. Gotye’s version of this song is one of my favorite radio hits, and I think Mayday did it justice with this.

“Glad You Came,”without a doubt, is my second favorite off the album.  We Came As Romans’ cover is probably the most sound-a-like cover on the album (in comparison to The Wanted’s version). In the first verse, I almost thought it was the original song because of how much the lead singers for both The Wanted and We Came As Romans sound alike. The chorus is probably my favorite part, just because you really get to hear the two vocal styles of pop and the punk come together. This kind of cover really shows what this compilation is all about.

Like Moths To Flames – “Some Nights” (Originally performed by fun.)

Out of all the songs on this compilation, this is the one I was the most nervous for. I really have a soft spot for fun. and though I thought Like Moths To Flames could give “Some Nights” a good spin, there’s just something about Nate Ruess’ voice that I can’t help but love. Regardless, I was intrigued by how Like Moths To Flames composed this cover.  While fun.’s version of “Some Nights is a lot more upbeat, Like Moths To Flames gave the track a darker side, and I think it worked well for them. When you actually listen to the lyrics of the song it really does work for both the cover and the original. Like Moths To Flames emphasized on this very well.

Shout out to Breathe Carolina for representing the King Of Pop in this cover! I commend them on their ability to not stray too far from the original with this song, because I feel like it’s a very gray line. With such a big, iconic song like “Billie Jean,” it’s hard to sometimes make a cover work. However, Breathe Carolina really stepped up. My favorite part of the song is in the last thirty seconds. They really took the song into their own and showcased their true hardcore-meets-dance-pop style.

I really want to like this cover, but I don’t think it embodied Forever The Sickest Kids in the way that it should have. I love Forever The Sickest Kids, which really breaks my heart to feel this way about this cover. I don’t believe Jonathan Cook sounds his best on this, and the heavier parts of the song for me were just awkward.  They didn’t flow well with the rest of “We Found Love,” and you could almost tell when the screams were going to come, before they even happened. I also feel like Rihanna’s version is just so hard to replicate because of how truly pop it is.

Issues really nailed this one. Certain times in the song they really showcased their diversity. The intro scared me a little, and I thought it would be too heavy and blood pumping for a slower song such as “Boyfriend.” But it’s evident that the band wanted to include many similar aspects to Justin’s version, and did so with style and grace.  They sped the tempo up with the harder points in the song, but managed to slow it back down during the chorus.

I love when Fearless includes bands like Crown The Empire on the Punk Goes Pop albums. It really opens up the eyes for people who generally wouldn’t pick up a more hardcore band’s album without scaring them away. This version of “Payphone” is definitely different and something people wouldn’t think of at first. But, I appreciate bands like Crown The Empire that stay true to themselves and their music in a cover like this. It worked well for them and wasn’t too overboard at all.

I was really let down by this. I love The Maine so much, and I realize that their sound has changed a good since their first album, The Way We Talk. Honestly though, I was really hoping they’d have a little bit more fun (no pun intended) with this song.  It was an interesting take, and the actual cover itself sounds good. But as for a cover that does the original song justice, I don’t think this was up to par.

This is definitely my runner up in the sound-a-like category. Craig did an awesome job on this cover. Much of the song is very similar to the original, especially because Craig and Chris Martin share the same vocal range. I do like that Craig took certain parts of the song and really put his personal touch in them. The beginning almost sounded a little like Cinematic Sunrise if you ask me!

This cover makes me laugh the most because of how far each of these songs are from each other on the musical spectrum. Probably the heaviest band on the album covering one of the more popular rap songs out right now is just too great to me. Like I said earlier about Crown The Empire, it’s great that these types of bands are included in the compilation, because they are the ones that stay the most true to their sound. The World Alive definitely made this cover their own and I respect it fully. Even in the real version, it’s hard to tell what they actually say so screaming really works for this song!

This is the final song off the album, and boy does it go out with a bang. This is my number three favorite cover on Punk Goes Pop 5 for many reasons. First of all, SECRETS absolutely put it down on this track. They may have even made me like this version better than the original. Second of all, like I said before with a lot of the other covers I’ve liked off this album, they had a good balance between staying true to their sound, while also  including many aspects that Gym Class Heroes had in the original. Are we sure Travie McCoy wasn’t doing guest vocals on this? Can you sing guest vocals on a song you originally performed? Wait what?