The indie-electric band of youth, Smallpools, has just released their first album titled LOVETAP!. Riding the success of popular hit “Dreaming,” their album picks up right where they left off. A 14 track EP, with their signature up beat style, combined with some more instrumentals leaves you pondering the lyrics as much as it does the unique style of beats. Influences from other bands are dripping off of their work. Smallpools is the creation of the band Phoenix having a baby with the band Two Door Cinema Club, with Passion Pit and Vampire Weekend right there acting as uncles.

They start out with an interesting song in “American Love.” Thoughts of how Two Door started out with “Cigarettes in The Theater” in their album Tourist History cannot leave my head. As the track progresses it doesn’t seem as uplifting as I had come to expect from Smallpools. This quickly changes as “Killer Whale” starts up. You really hear the Passion Pit influence in this song. The synthesizers are regularly heard along with the intense drums. In the usual third spot goes their single and biggest hit: “Dreaming.” This track takes from everybody. The high pitch voice just shouts out Passion Pit, but really as much as I like comparing them with other bands… “Dreaming” is the essence of their individuality.

“Karaoke,” “Streetfight,” and “Mason Jar” throw out a solid middle with two really excellent dance songs. “Mason Jar” brings up the rear with a song that takes a bit to build but eventually carries you right through with just as much strength as the two tracks right before it. “Over & Over” is very Vampire Weekend feeling. Obviously, the lead singer of Smallpools (Sean Scanlon)  is no Ezra Koenig (seriously though who is?) but he brings a nice slow jam into a song with an uplifting chorus and amazing hook. LOVETAP! hits a bit of a recess with songs like “LOVETAP!” and “What’s That A Picture Of?” but you get over these two fast with one of my personal favorite tracks off the album: “Dyin’ to Love.” 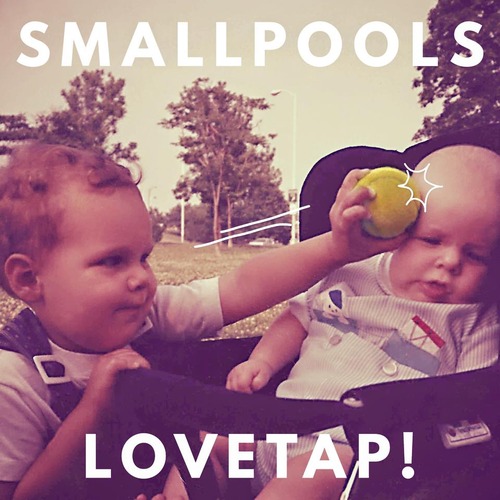 The album cover of LOVETAP!

“Admission to Party” is weak but again you get over it. This album is filled with a couple of songs that make you scratch your head but considering it’s the bands debut album, it doesn’t surprise me all that much. “9 to 5” again throws me that Vampire Weekend vibe. The sound of that guitar at the beginning and the soft background instruments that highlight the voice just bleeds Vampire Weekend’s style. I love it because their next song completely reminds me of their one parent: Phoenix. “No Story Time” is a pure alternative rock hit. It has the interesting voice mod that can be parralled with Phoenix so well. “Entertainment” by Phoenix is a good comparison. The album ends with an interesting song. “Submarine” seems very out of place but that doesn’t make it necessarily bad. It ends the album on a softer note. A nice beat, but not many lyrics results in a dream like sequence ending out a terrific album.

Smallpools is growing. They are still developing their individual sound and for now the influences they have taken from other bands still shine through a little too brightly. This will change though, and when it does look for this young band to be a headliner in the next generation of the alternative rock genre.