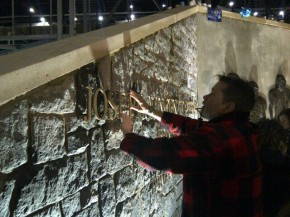 Derrick Leiby may have taken one of the best photos we have found over the last few days.  This picture is just simply amazing, it’s inspirational, it’s so many other adjectives that I don’t have enough room to write here.  And it gets even better, Derrick wrote a note titled “Joe Paterno” to complement this photo, and guess what, it is also an amazing read.  Enjoy this story below, and click on the link below to “like” his note on facebook.

Here is the note:

To set the premise for this story, it’s written by myself, a junior accounting major at Penn State. It was written in my car in the parking lot directly across from Paterno’s statue tonight (1/23). I hope you enjoy it.

This past Saturday night at Penn State was just like any other Saturday night in The Valley. It consisted of everyone celebrating their accomplishments from the past week, hanging out with friends, and trying to plan out how you could possibly get all of your homework for next week done the next day. Then there was a stop. The Penn State everyone knew stood still. News broke of Joe Paterno’s death. It was on a school-affiliated newspaper’s website. It was blanketed social media sites. News tickers on ESPN immediately began conveying messages about the breaking news. After a very painful half hour of trying to comprehend what happened, news broke that he was still alive. I drew a huge sigh of relief and went back to my hypothesis that our coach was immortal. The night continued with the scare on everyone’s mind.

Sunday morning began like almost every other one I’ve experienced at my school. I checked the time, began thinking about what I was going to do with the rest of the day, and smiling at the thoughts of the night before. Then I went back to sleep. After waking up the second time, I began checking the news to see if there were any new stories about Joe. When I read that he was “officially dead,” I didn’t think much of it. I remembered reading and hearing that he had died the night before and that it wasn’t true. As soon as I turned on the TV I saw the headlines sweeping the whole left side of SportsCenter. The news suddenly appeared to be genuine this time, but it seemed so surreal that I wasn’t able to comprehend it. In my whole life that I paid attention to Penn State football, I thought that that I had a better chance of waking up to a million dollars in my bank account than the news that Joe Paterno no longer living. It didn’t matter that the NFL Conference Championships were that day, ESPN had the whole show blocked with news of Paterno. Hearing the wide variety of people in the sport of football that spoke on his character and contributions is when it began to sink in. It didn’t seem like the Joe Paterno I’ve always known could ever die. But all of the people getting interviewed about the story were talking about the Joe that I knew. The inspiring, overly generous, face of this school was the guy they were talking about. The guy who made contributions to people’s character, the school he was proud to represent, and, least importantly, football.

Sunday evening began like any other. I went to my friend’s place where I was going to watch football for the rest of the day. The Giants were on their way to the Super Bowl, but it all seemed so irrelevant in comparison to the news the Penn State community was trying to cope with. Seeing my favorite team in professional sports going to the biggest game in professional sports seemed so petty all of a sudden. I visited Joe Paterno’s statue that night to see the offerings people gave to remember the man that they missed. As I got closer to the stadium, the glow that was given off took my breath away. It was a foggy night, and Beaver Stadium’s glow lit the sky with a white aura. When I finally got to the statue, I could barely take in what I was seeing. The statue was surrounded by hundreds of candles, countless posters, tens of dozens of flowers, and a steady flow of people looking onward. It was after 2:00am, so the thousands that gathered earlier to show their grief were dwindled down to a varying group of fifteen or twenty people. No words were said, but everyone knew what the others were thinking. When candles blew out, they were proudly and quickly relit by the closest person. I reflected and tried to come to terms with the enormity of this day in my personal life for about fifteen or twenty minutes, then headed home. I went to sleep that night with a lot on my mind and woke up in the morning feeling the same way.

Monday consisted of trying to do homework in between watching tribute videos and reading headlines. Five out of the six internet tabs I had open were about Joe Paterno, and the lonely one was homework. Every news outlet had their headlines about him. It seemed eerily similar to a couple months ago when State College was rocked by the last set of headlines dealing with Penn State. I was glued to mass media sites and local news agencies for details. I watched countless videos thanks to The Collegian, Onward State, and TheSchoolPhilly. My day was quickly consumed by everything Paterno and I knew I had to make another trip to the statue. This time, I went there and experienced things that I’ll never be able to forget. The first thing I noticed was the change in the crowd. The all-student crowd that I saw the night before was in stark contrast to what I saw tonight. The statue’s new onlookers were almost entirely people older than me. They might have been much older than me, but we felt the same pain. The Joe they knew might have been younger with a different team, but that’s about all that was different. He was the same philanthropist and motivator for both of us. He embodied class and was a role model for Penn State. After taking some pictures, I took a few steps back and tried to think of how many people he has impacted either directly or indirectly. I was looking on at the statue when I heard the crying of a woman over my shoulder. Shortly after, I heard the sound of a man crying next to her. Finally, when I heard a third person start crying, I looked over my shoulder and saw something that made my legs feel like Jell-O. I looked and saw three people, presumably a family, walking toward the statue from behind me. The first person of the three was a very young girl on crutches. The next person I saw was her mother walking behind her. She was leading a blind man toward the statue. He was walking with cane in one hand and hers in the other as he approached the wall surrounding the statue. With the guiding hand of his wife, he had his hand placed on the outstretched metal letters that reads: “Joseph Vincent Paterno”. He dropped his wife’s hand, put his cane in his mouth, and used both hands to touch the letters. When his second hand touched the cold metal, he smiled so big that even his cane in his mouth couldn’t hide it. He began moving his head around, but he couldn’t see anything. He moved down the sidewalk, using both hands on the letters to guide his walking. It hit me like a ton of bricks and I couldn’t hold in my emotions any more. I quickly joined the people around me that were crying. I was standing by myself when a woman at least 40 years older than me came up to me and grabbed my arm. She was there to comfort me and began talking to me about what she was feeling. Our conversation ended with her telling me that this is the hardest death she’s had to deal with, only excluding her parents and husband, who was a retired Pennsylvania State Trooper who died just 15 months ago.

I can’t say I had any doubt about Joe’s character a year ago, a month ago, or a day ago. This experience forever solidified to me the man that I had so much faith in. Being able to see a blind person smile while touching his name was one of the most amazing things I’ve ever seen. I can honestly say I now aspire to be the person that he was. I know it’s almost impossible for me to have an impact on so many lives, but I might as well try. In my opinion, Joe was an incredibly well-rounded person that happened to know football, not vice-versa. His football knowledge is what gave him the opportunity to show the caliber of person he was. Two beliefs I had about him, which were he was inhuman and immortal, were disproven within a two month time period. In all honesty, I still look up to him just as much as I did a year ago. I’m as proud to go to Penn State now as I was a year ago. I will always respect a good human being, and he deserves that from everyone.