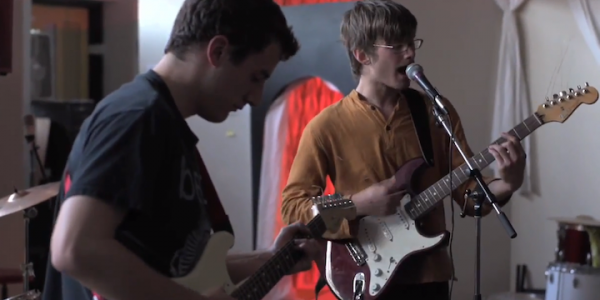 Looking for a new song to vibe to?

Check out Ambeyoncé’s new single “Ashes to Rust” on their band page!

This State College band is unique in more ways than one. Ambeyoncé’s music is fresh and atmospheric with a variety of elements and strong influences from Radiohead and Beck. However, not only do the members of Ambeyoncé play music, they are active in a variety of organizations working hard to better the State College music and arts community. Jon Niles, guitar/bass player in the band and PSU student, was the former Vice President of Students Organizing the Multiple Arts (SOMA), a club which organizes events on campus showcasing student and local art of all kinds. He and Eric Weidenhof (vocals/guitar/bass/keys) participated in New Leaf’s Initiative’s ‘Happy Valley Music Expansion,’ which says in it’s mission statement that it is “a community and philosophy that provides and supports musical experiences through resources, community engagement, networking, and fusion.”

Jon, Eric and drummer, Brad Podolski, are moving to Pittsburg soon, but plan to keep on playing together. In the meantime, you can catch Ambeyoncé in one of their upcoming shows!

8/17 at The State Theatre with Sugar Bomb and Ellen Siberian Tiger at 9:00pm

Check out this video of Ambeyoncé at Arts Crawl 2013!