Behind the Booth with DJ Mikey Lin 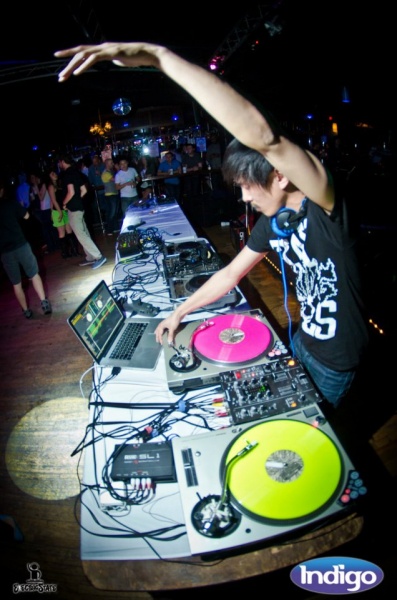 In the first of our local DJ profile series, Behind the Booth, we sat down with DJ Mikey Lin to get the lowdown on his music and State College’s EDM scene.

So how did it all begin? What gave you that initial push?
So I started when I bought turntables off of my friend in the summer of 2010; I had always been interested in DJing, but I never felt the need to buy turntables until my friend was selling his. I bought them, and it turned out to be the best decision I ever made. After that, I just bought some records, and spent many hours in my room matching beats that didn’t sound right together.

Where did you learn your skills from? Were you self-taught?
My friend, who sold me the turntables, taught me the basics, and the rest was like a riding a bicycle; you keep going until you fall off then you get back up and go again.

How would you define your style?
I mostly play the type of music that I happen to be liking at that time. I like Melbourne House, Deep House, Drum and Bass, UK Garage, and Dubstep. When I play parties, I usually play like Electro House, Trap, and Dubstep. Lately, I’ve been getting into Melbourne House which is really bouncy and silly, and it just makes people happy. I play whatever puts a smile on my face.

Where do you normally play, and what venues throw the best parties?
I play Chrome every Wednesday, and once a month, I play at Levels for Womp Wednesday. I have to say house parties are the best – the intimacy of a basement cannot be beat.

What’s the best event you’ve played at/put on?
We had an American themed party in my friend’s basement – people really respond to celebrating America. All my friends came in from out of town, and we all just had a really good time.

What do you think of State College’s current dance music scene?
I think it is way better than I could ever have imagined. Levels is bringing in a lot of great names, and more people are starting to get involved in this music. Before, you could predict who exactly would be there, and now at each event, I see more and more new faces.

Are there any other State College DJs that you want to collaborate with?
I really like spinning with Keigo because he’s okay with playing the mainstream stuff, but he also likes a lot of different things. I have a good time spinning with him.

What projects are you currently working on, and what can we expect from you this year?
Right now, I am trying to get more people to come out to the shows downtown. I want them to come out, support the local music scene, and just have a good time!

When and where is your next event?
Wednesday, at Levels, I am playing Womp Wednesday which is a bass oriented night at Levels with three resident DJs and a guest DJ from a nearby town. It’s mainly for Drum and Bass, Dubstep, and Trap.

If you can’t wait until Wednesday, check out some of his mixes below!