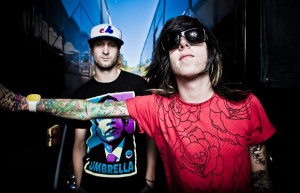 The Late Night committee of the Student Programming Association is excited to announce the duo of Breathe Carolina at 10 p.m. on Friday, December 2nd.  This free event will take place in Alumni Hall of the HUB-Robeson Center. A valid PSU photo ID is required for entrance.  As always, there is zero tolerance for alcohol.  Any person who appears to be under the influence of alcohol will be asked to leave the show.

Starting out in a bedroom in the suburbs of the Mile High City, David Schmitt and Kyle Even started playing music as a means of escape.  As one of the first bands to start making waves via social networks, they experienced first-hand what it felt like to seemingly gain an overnight following.  What began as something they did for fun, quickly struck a resonance with people they had never met.  And after they hit the road, to discover the thousands of “friends” they gained online were real fans, singing along to the tracks they wrote in the confines of their homes, was a humbling experience.  “ It was the best adventure I’d ever had!” notes singer/screamer Kyle Even.  “To find people who knew who we were so far away from home was a crazy experience!  We were so happy that people knew our songs and could relate to us.  We still keep in touch with a lot of those people from our first shows out of state.”

The band’s newest album, Hell is What You Make It, is due out next July.  It’s central theme is about making the best of any bad situation and finding the fun in the bleak times.  Euphoric, pulsating 80s electro-influenced summer anthem “Blackout” and it’s bleary-eyed partner-in-party “Last Night (Vegas)”, sees the band stay true to their roots of bringing the good times.

With “Blackout” steadily invading the Top 40 airwaves, it’s taken Breathe Carolina to new heights, including a performance on Jimmy Kimmel Live.  As the band heads out on their biggest headline tour to date, they are ready for what the future brings.  “We’re excited to take this album on the road, and see the tracks come to life in a live setting,” says Even.

Follow us: @StateInTheReal – SITR will be tweeting live pictures and details from this concert.