This past Friday, close to 1000 Penn State students poured into Alumni Hall, wielding multi-colored glow sticks and excitedly chattering about the entertainment to come. They pushed up against the barricades separating them from the empty stage, as lights flashed amongst the pulsating dance music. The stage was adorned with a glossy DJ booth, and as the music transitioned through different versions, remixes, and mash-ups of “Levels,” the anticipation began to rise. 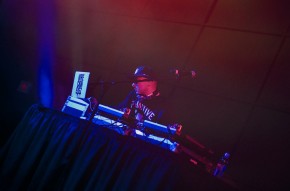 If one were to crunch the entire night into one word, that word would be “wild.” What Penn State students came for was a concert, what they got was a performance unlike any Alumni Hall has ever seen. DJ Wreckineyez opened up the show, calling out “WHO’S READY TO PARTY?!” as he graced the stage. Brandishing his turntables like instruments of power, he warped and revamped ubiquitous hip-hop hits for the crowd. A plethora of colorful lights flashed around him, and as the air began to bristle with the heavy bass, the audience started to flux and flow to the music. He kept the crowd entertained until around 10:15. It was then that Asher Roth took the stage to “We Are The Champions.” He opened his hour-long set with “Bastermating,” and from there, things got pretty crazy.

Roth took to the barricades during the opening performance, throwing himself into the crowd and involving every member from the very start. Jumping back on stage, he strode back and forth, unwavering in his flow. Calling for two fans, he brought them up on stage to rap his older fan favorite “Lark On My Go Kart.” The rest of the night followed in a similar fashion, with Roth catapulting into the crowd and bringing the crowd up on stage at intermittent points of his set. He kept the audience engaged through every minute of every song, and his army of fans threw themselves at him with the animalistic intensity that only the most loyal (and in some cases, inebriated) devotees can exhibit.

Asher also took on the role of a public speaker that night, and delivered some solid sound bites of wisdom in between his tracks.

“Sometimes music is all we have.” He said, and even addressed the scrutiny Penn State has been under for the past year,

“I’m proud of you guys for sticking together.”

He made sure to take a stop through his set and had everyone sing Happy Birthday to DJ Wreckineyez, then ended his set with his iconic smash hit “I Love College.” He left with the crowd teeming in a joyous uproar, full of adrenaline and ready for The White Panda. 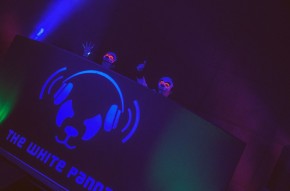 Though a portion of a crowd left, a solid number of people stayed for the main headliner, and they were definitely smart to. The White Panda stood behind a barricade, masks and all, as they ripped through the air with their deft house breakdowns and ear-grabbing top 40 mash-ups. Their masks illuminated with colors and lights, and during a few points of the set they came out and sang along with the crowd. Though their performance wasn’t nearly as crazy as Roth’s, they certainly delivered and kept their fans partying until way after midnight.

Once again, the Student Programming Association executed what was a fantastic show, bringing talented acts to kick off the weekend and provide quality, free entertainment for the student body. All of the crazy (but controlled) fun was due to their hard work and effort, and without them, we would be resigned to pay money to enjoy talented live acts. Appreciate the fact that you have a club on campus that provides these opportunities, and please remember to be respectful when you come to these shows.