Concert Review: Yellowcard with The Wonder Years and We Are The In Crowd

Sam
Mainstream Music, Music
Comments Off on Concert Review: Yellowcard with The Wonder Years and We Are The In Crowd 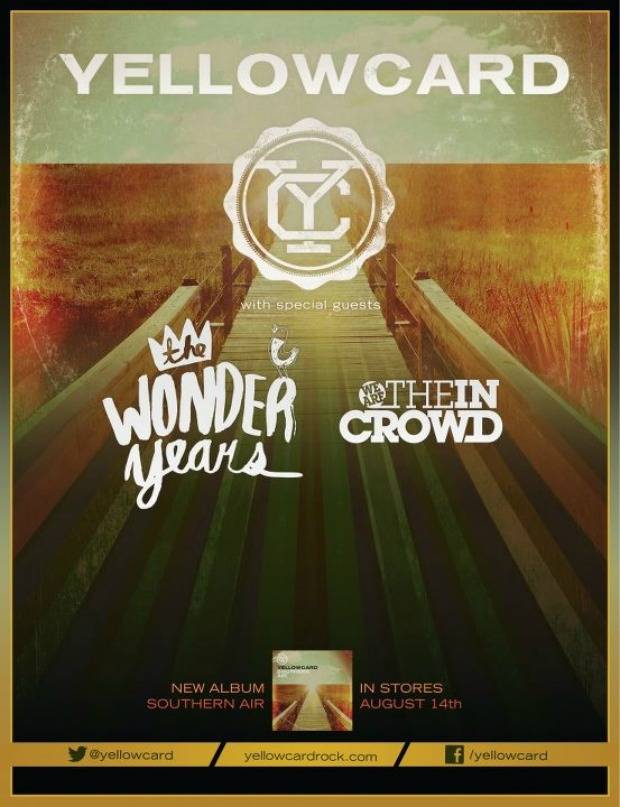 When I first heard about this tour back in September, I actually cried. It was the picture-perfect line up, I literally could not ask for anything better. Fast forward to the Friday of Thanksgiving break and you will find me at the Electric Facotry in Philadelphia, bouncing off the walls because I couldn’t contain my excitement. This night was going to be perfect, I could feel it in my bones as I stepped into one of the best venues Philly has to offer for a sold out show.

My best friends and I entered the EFactory as opening band Sandlot Heroes took the stage. I actually didn’t know there was even another band on the lineup, so it was a pleasant surprise to see a brand new band that I’ve never heard of. Sandlot Heroes set the tone for the night with their fun and energetic set. I definitely want to look into them more after seeing their set because I don’t remember much from it. I think my excitement for the next three bands blocked out everything else. Oops. Sorry Sandlot Heroes!

Next up was a band I like to consider my “guilty pleasure.”  We Are The In Crowd is not my usual cup of tea (in the sense that it is very pop), but I can’t help but love them. My girl crush, Tay Jardine, is perfect in every single way possible, every time I see her perform. This past summer, I caught her and We Are The In Crowd multiple times during their sets at the numerous warped tour dates I attended. Each time they were so appreciative of their fans, and it’s so awesome to see that. They sounded great at the factory and their set list included almost all of my favorite songs. However, they were playing for a tough crowd.  My friends and I pushed our way to the front and center but we were the only ones singing along and dancing. Almost the entire crowd was there for The Wonder Years, which is no surprise due to the fact that it was indeed TWY Hometown Show. One thing I’ve learned in my music scene is the one crowd you don’t fuck with is The Wonder Years crowd on their home turf. It was heart breaking for WATIC but I was more than ecstatic for The Wonder Years set.

At the end of the show however, I got the chance to talk to Rob Chianelli(drummer) and Jordan Eckes (Guitar/Vocals) and they too knew what they were getting themselves into when coming on stage for a sold out Philadelphia show. They knew the kids were there for The Wonder Years but they were happy to get their music out to a crowd that usually wouldn’t listen to them. 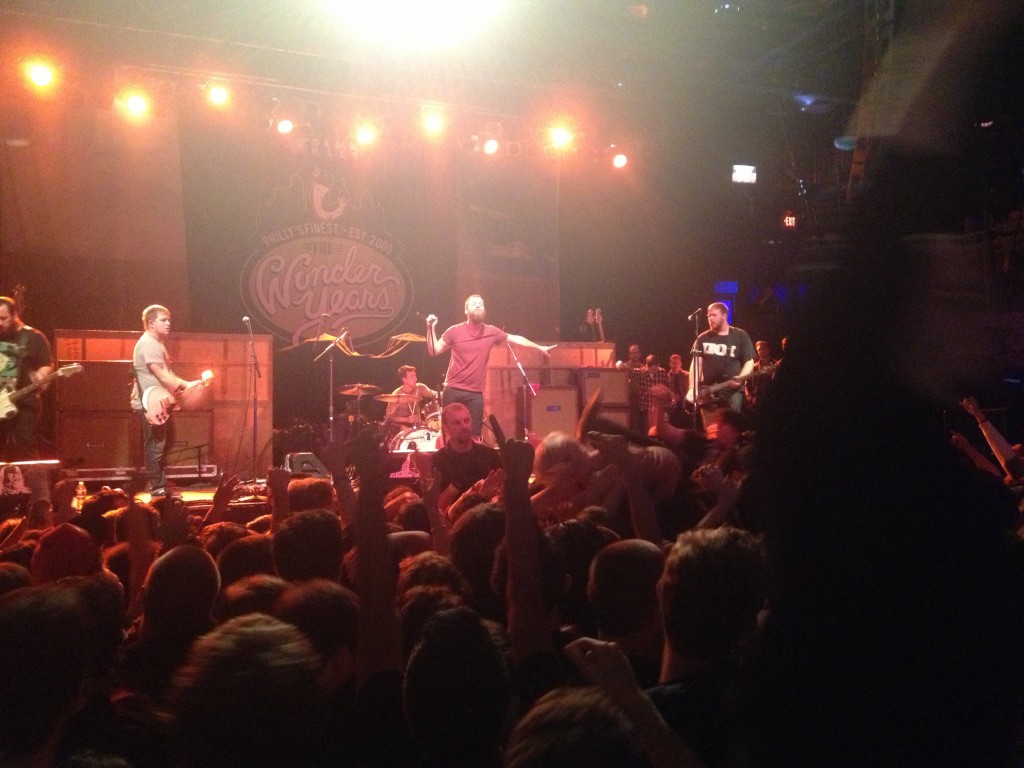 The second We Are The In Crowd’s set concluded, and I literally mean the second it ended, my body was pushed FULL force toward the barricade. One of my friends later compared it to the scene in Finding Nemo when Marlin and Dory were surrounded by all the jellyfish with no way out. Of all the concerts I’ve ever attended, this has never happened to me. There was still 15 minutes of teardown and set up before TWY would even come out, and I couldn’t move. I knew I was in for a wild ride.  Previously, I only saw The Wonder Years one other time but wasn’t in the crowd for it. Regardless, in my music scene everyone knew about The Wonder Years, and everyone loved them. This crowd was unlike anything I’ve ever experienced. The Wonder Year’s backdrop came down, reading “Philly’s Finest – EST. 2005,” and chills ran down my spine. Even before these “hometown favorites” came out on the stage, kids started crowd surfing to the intro music. I wish everyone could experience The Wonder Years in Philadelphia, because it’s truly an amazing time. Many crowd favorites were played that night, including “Logan Circle,” “Washington Square Park,” and “Came Out Swinging.” TWY put on a hell of a set, and had so much respect for their home. Lead singer Dan “Soupy” Campbell explained that Philadelphia sold the most tickets of the ENTIRE tour. It was so cool to be apart of such an important night for The Wonder Years. The pit was one of the wildest I’ve ever been in, and I know I’ll never forget it. It was the perfect homecoming for TWY. 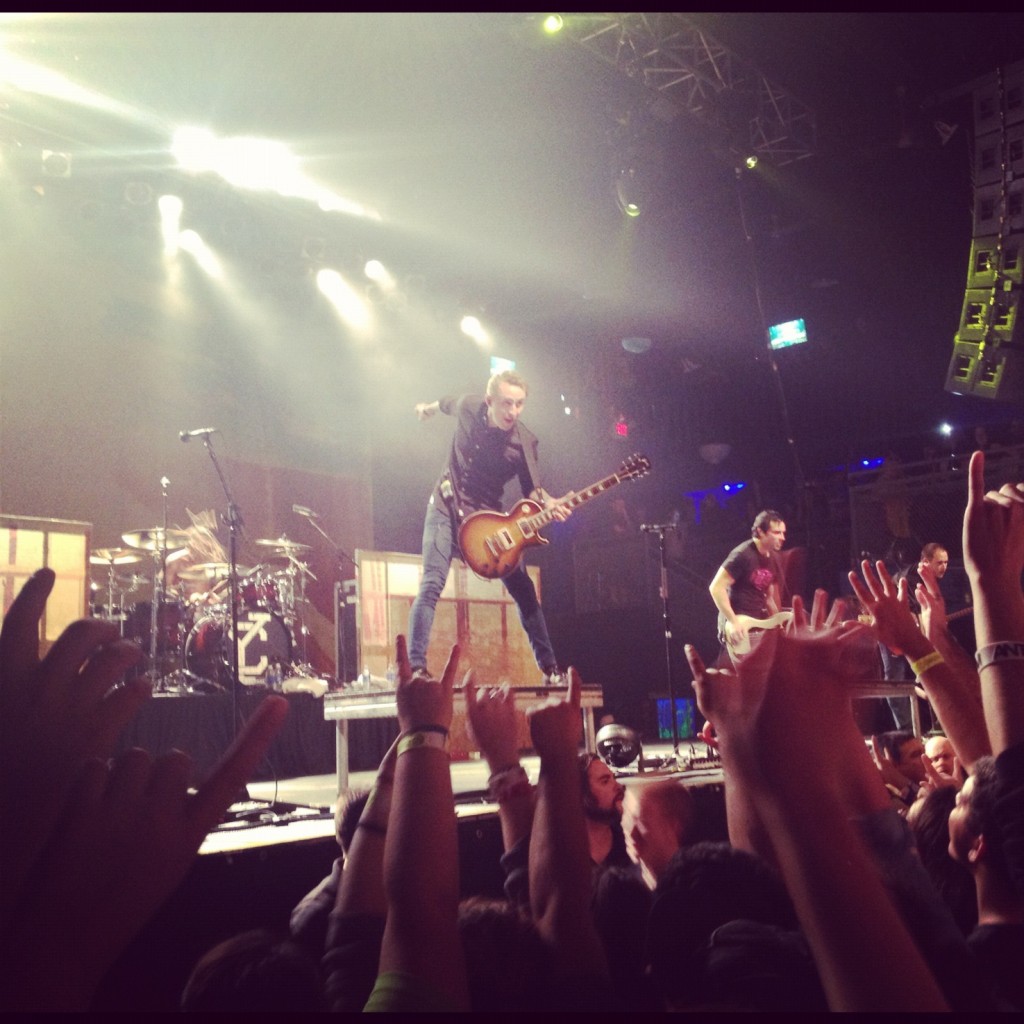 Last but certainly not least was Yellowcard. Yellowcard is undoubtedly one of my favorite bands to see live. They are literally SO good that I can’t even put it into words. If you’ve never experienced a Yellowcard show, I suggest you do so immediately. Growing up, I always had a soft spot for Yellowcard. I played the violin until 8th grade, and Sean Mackin is more than an inspiration to me.  He’s gone through so much, and his smile is just so contagious when he’s on stage; you can’t help but smile back at him. Their set was more than perfect; they even threw in a surprise acoustic cover of Mumford and Sons’ “I Will Wait.” It was more than magical to say the least. New and old Yellowcard songs graced the crowds ears at the Factory that Friday night, but nothing meant more to me than the encore. “Here I Am Alive” is my absolute favorite song off their new album, Southern Air. Hearing it live was unreal. The lyrics to that song fit my life perfectly at the moment, and Yellowcard killed it. Of course the night ended with “Ocean Avenue,” and it was as amazing as you think it was.

In the end, this night was one for the books. Probably one of the best concerts I’ve been to in a really long time, and a night I’ll always remember. If you missed out on this tour, I feel bad for you because there’s not much that can compare to the magic I saw on the stage when these three bands came together.