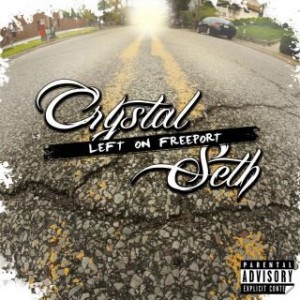 Crystal Seth has been coming up in the rap game for the last four years. He began writing music in the summer before his junior year, and by senior year he had won his high school’s Battle of the Bands. It goes without saying that once he started his career at Penn State, he turned his music up a notch. Seth raps with a catchy flow, and his lyrics are a step above many college rappers these days. You can tell his lyrics are influenced by the people around him, and the school that we all call home. Hailing from the steel city, Pittsburgh, Seth has a similar rapping style to a few other prominent Pittsburgh MC’s. He released his first official mixtape “Self Portrait” in April 2011, and has been viewed over 4,000 times on datPiff.com. His fan base is growing, and will continue to grow now that he has released his newest mixtape “Left on Freeport”. Wednesday night he released the video for “Get Right (prod. DJ Farrell)” and in less than 24 hours it has been viewed over 2,500 times. Everyone go check out Crystal Seth, download “Left on Freeport”, and spread the word about this kid, he’s about to BLOW-UP!

You can download “Left on Freeport” here:
http://www.datpiff.com/Crystal-Seth-Left-On-Freeport-mixtape.272627.html
or
http://www.mediafire.com/?d8y6f0pn272odol

Here is what Crystal Seth had to say about his new mixtape, and more!

SITR – How did you come up with the name?
CS – I wanted something that represents me, something that separates me from all these other cats in the burgh. Freeport Road is the street I grew up on after moving out of Squirrel Hill. I wanted to connect the city with my location now as they are both a big part of me. Coming to my home now, from the city, you must make a Left on Freeport. It also embodies and encourages the listener to do what they please in life, freedom, and roads simply connect our entire nation, you’ll hear in the self titled track, “Let me welcome you to Freeport Road, there’s no restriction nor direction that you need not go.”

SITR – You seem to have a very loyal fan base; do they influence your music at all?
CS – I love my fans. Its not like were global yet, but were growing, and the fans I have go hard as hell for me. They ARE my influence, them and the people I keep around me.

SITR – Tell me about “Left on Freeport”.
CS – It’s a huge step up from my previous work. All recorded/mixed/mastered in a professional studio called Tuff Sound Recording in Pittsburgh. I think that if anyone is a fan of Self Portrait, I’ve grown immensely as a writer in these past 7 months leading up to the tape. The dude that records me – and I say the dude in the upmost respect, because he is the fucking dude – is Soy Sos and the seconded I recorded with him I knew he was the man to stick with. He has done extensive work in every genre of music and gives off a very worldly vibe to the music. That is crucial, because in this tape and in general you’ll find a lot more than just hip-hop, its music.

SITR – Your video for “Get Right (prod Dj Farrell)” got 300 views in just a few hours after it was released, do you think this will be the hit song, or is there a surprise coming for your fans on “Left on Freeport”?
CS – Well if anyone has followed my work I usually do one party oriented song per tape. This should be the most popular at a campus like Penn State, but I have some features on the tape that are bubbling up a pretty large buzz themselves, much bigger than me at this point. I mean I’ve only released 2 tracks so there should be 12 more surprises on the tape. – Plus it opens with snippet of a poem from my mom about the Allegheny River – parallel to Freeport Road – called River Swerving, that’s where I get all my writing skills… She hasn’t even heard it yet haha, should be a pleasant surprise. And I get my passion for music from my dad. Music and family is his life, truly, just had to throw that in there.

SITR – Has going to PSU affected your music at all?
CS – Absolutely, this is where I live. This is what I know, and what I see on a daily basis. Both the negatives and the positives of my surroundings will forever influence my music.

SITR – Do you have any upcoming shows?
CS – Yes, I have a show Monday actually, October 17th at the Altar Bar in Pittsburgh. I also have a show November 8th, which I’m going to have to get more information about before I say something dumb and release some false information haha.

SITR – Any shout outs for the people who helped make this mixtape, your fans, or people who have helped you grow in the rap game?
CS – My gosh, everybody… My parents -my brother -my management, Eric Caplan – my promoter, Anthony Smith – Harrison Smith, who’s helped me throughout the creative process – Alex Di Marco – Frank and Edge Media – Dan Folger – Anthony Koopa aka Billy Hoyle – Brian Lovin of The Kollection – all the blogs – all the older cats thats looking after me in the burgh that are more experienced than me, helping me not look like an idiot haha, especially the features on the tape, and my previous one – DJ Farrell, Jerz, David Leavitt – all the dudes in DTD of state college for letting us film the video there – the list could go on forever – not everyone needs their name on paper to know they’re appreciated by me. TWB tho.