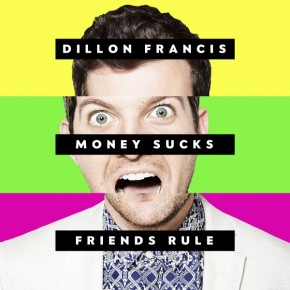 Producer and DJ Dillon Francis plays ringmaster on his first studio album Money Sucks, Friends Rule. The California native gathers a motley assortment of rappers, producers, DJ’s, and singers for an eccentric experience. Francis, who works under the Mad Decent label/collective, pulls out all the stops. The packed roster makes for a fun ride. After all – the more the merrier, right?

“All That” featuring Twista and The Rej3ctz

Francis sets the tone off the bat with a bombastic party anthem backed by Windy City rhyme-slayer Twista and West Coast collective The Rej3ctz. “Hella women, hella bottles poppin'” they got all that. It’s fun, it’s a Friday night.

Things get exotic when DF and DJ Snake team up on a mesmerizing dance number. The pungi aided melody gets overpowered by the heavy bass but it’s still a welcome treat.

“When We Were Young” featuring The Chain Gang of 1974

This is prime club EDM. The Chain Gang of 1974 have the perfect vocal presence on the track. It’s an emotional full track that captures a moment.

“Drunk All The Time” is a personal favorite. Simon Lord navigates a groovy 70’s disco infused melody narrating the tale of a woman who has got a hold of him. Lord croons, “Being with you, I feel drunk all the time. I cannot get you – get you outta my mind.” The Brit perfectly captures the inebriating experience love and lust bring us.

“Love In The Middle Of A Firefight” featuring Brendon Urie

The impressive vocal features continue on the passion infused “Love In The Middle Of A Firefight”. Panic! at the Disco frontman Brendon Urie sings over epic production laced with all the notes of a forbidden romance.

Francis goes light on the lyrics for the dystopian mod club song. There’s something about the song that feels dirty and uninhibited. Francis’ evil production sets the tone for a dark night.

The sample based party rip infuses hip-hop and some soul. The continual tweaking of DF’s sample goes a long way. Some parts of the track play like rubber bands; stretching until you think something might pop. It’s just enough to put listeners over the edge and bring them back.

“We Are Impossible” featuring The Presets

The Presets shift  the album a bit as they let the 80’s vibes flow on “We Are Impossible”. Frontman Julian Hamilton doesn’t shy away from baring his flawed soul. Let your mistakes show. This is what connects us anyway.

“We Make It Bounce” featuring Major Lazer and Stylo G

Possibly the most kinetic song of the album; “We Make It Bounce” throws audiences into the mad chamber of a Major Lazer and Stylo G collab. This is hot sweaty dancehall meets strobe light Red Bull fueled club. It’s a fun song that bridges genres and will undoubtedly get a crowd moving.

The uptempo electro heavy track plays on crowd participation and a heavy bass foundation. Francis could have done without the cut but it doesn’t hurt the album.

Lily Elise lets all her love fly on the last song of the album. Francis does a decent job marrying her vocals with stellar production. Elise hits every note on the romance tinged EDM ballad. If there’s a song on this track that you’re sucking face to – it’s got to be this one.