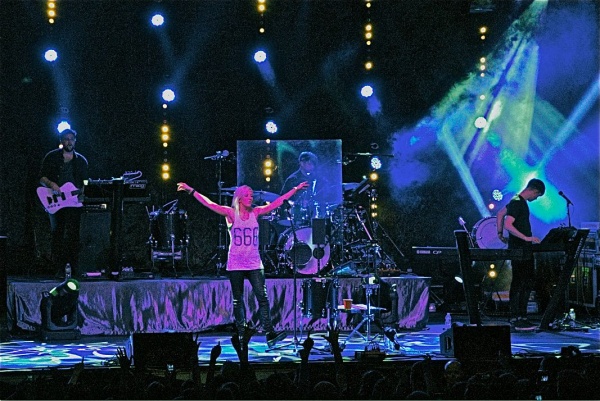 A week has passed since I had the absolute honor and fortune to get a press pass to see Ellie Goulding at The Electric Factory in Philadelphia, but it feels like it was yesterday.

The show began promptly at 8:30 with St. Lucia, a band with the perfect amount of energy to pump up a crowd. Their electro-pop sound had everyone dancing on their feet and I, who had never heard of them before, was into their music immediately. The groove and vibe of the band had everyone’s attention in the venue. They played for about half an hour, setting the mood for the night.

And then, the much anticipated arrival of Ellie Goulding finally came. The lights went dim, and out came Ellie, clearly ready to put on a fantastic show from the start. And that’s exactly what she did. She started with “Don’t Say a Word.” The eerie hum in the beginning of the song had everyone entranced by this goddess-like figure before them. As the song progressed, so did her energy. After the first two songs came “Figure 8,” a favorite of mine, and hers too by the looks of it. As soon as the beat dropped, Ellie began to get into it, powered by the demonic red lights illuminating the stage. With every word and every hair flip, the music penetrated my soul and possessed me.  You could see the meaning and passion on Ellie’s face, which only made me fall more in love with her and her performance.

The show went on to include a majority of songs (including bonus tracks) from her newest album, Halcyon, which has had outstanding success since it’s release last October. She also brought her original fans back a few years, playing a few songs off of her old album, Lights, which included her beautiful cover of Elton John’s “Your Song”.

Some of my favorite performances of the night included the ever-famous “I Need Your Love” featuring Calvin Harris, “Only You,” “Joy,” “Anything Can Happen,” and of course, her exploding finale, “Lights,” which featured an unexpected drop into the Bassnectar remix after the second verse. This remix had the crowd in a frenzy and was the perfect way to close out the night with a bang.

To see these songs with my own eyes and to actually feel the beat in my bones was an enchanting experience. Periodically, Ellie would show us why she’s not only an amazing artist, but a talented musician as well, pulling out an acoustic guitar, banging on her own personal drum, and of course, showing the audience all the amazing things she can do with her voice. I could go on about her divine voice, but honestly all you have to do is listen to one song and you get it. This is a woman of many talents and who is not afraid to put it all out there. Thank God.

Being in a relatively small venue allowed the members of the audience, Ellie, and her band to form a sort of bond, which I think was strengthened by the eminent love she had for the crowd and the roaring support and adoration we returned to her. It was one of the few times I actually felt a connection to the artist on stage and the power behind her voice was enough to make the walls around us crumble. Ellie’s performance was perfect, and to be a witness to the captivating sounds that come out of her mouth was one of the greatest experiences of my life. Ellie Goulding literally rocked the house and put on the show of a lifetime. It’s no wonder she has millions of fans all over the world. She is a force to be reckoned with and I’m sure there is a lot more to come from her. And I can’t wait.