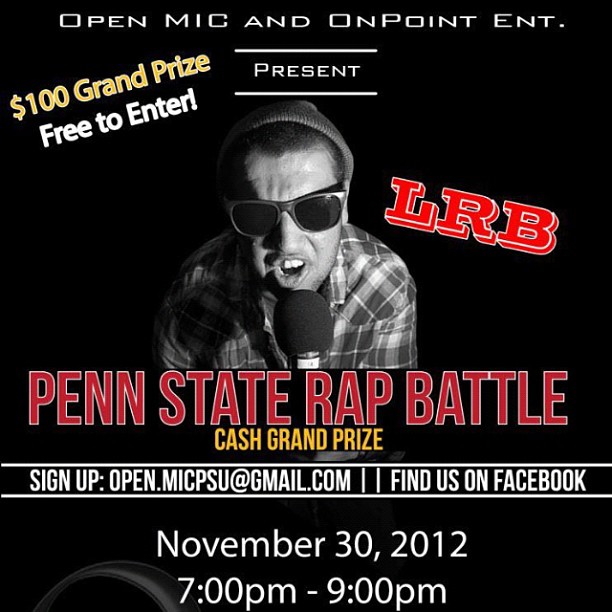 On Friday night, local Penn State rappers got together to compete in the first ever “Penn State Rap Battle.” The event was held and created by Open Mic and OnPoint entertainment. Once the technical difficulties were solved, the rappers finally were able to battle one another to see who could produce the best insults with their rhymes.

While the event was definitely entertaining and full of characters, we didn’t get to see too many solid rappers. Each artist brought their own unique style to each battle, but not too many brought good lyrics or good bars. Some of the highlights of the battle were insults such as “Malibu’s Most Wanted” or “The reason why white boy’s don’t rap.” While there were some funny moments, there were also some efforts that seemed a little misplaced. One of the most bizarre bars of the night was a rapper referring to himself as “the Jesus Christ of rap.” Whoa. When it was all said and done, Bret came out on top and got to take home the grand prize. The event was definitely fun and entertaining, there just needed to be a bit more diverse talent.

On Point Entertainment and Open Mic definitely did a great job putting the event together. It was organized and well thought out. I’m hoping to see more events from these guys in the future. Although they didn’t have great bars, a lot of the rappers involved make pretty good music. If you get a chance be sure to check out the hip hop scene here at Penn State. As always you can find new music from all these artists right here at the home of Penn State music, State In The Real.

Check out a clip from Penn State’s the first rap battle.
http://www.youtube.com/watch?v=HgIU-sTIA6U&feature=player_embedded