fun.'s Hit Song "We Are Young" Has Been Given A Parody "We're Not Young"

Vito
Mainstream Music
Comments Off on fun.'s Hit Song "We Are Young" Has Been Given A Parody "We're Not Young" 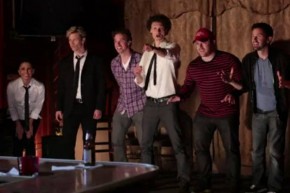 Yahoo!’s SketchY comedy series created a parody of the hit single “We Are Young” by fun., where they poke fun at people in their thirties whose lives have become routine and boring. The video shows at one point people in their 30’s trying to be young by trying to learn Photoshop or by writing a blog. The song has funny, witty lyrics drawing from our current times and pop-culture like “Now I know that I’m fat, shut up about that. I guess I’ll do elliptical, maybe I can finally do that yoga class. But I’ll probably watch HD-TV, gonna stay at home and watch ‘Modern Family.'” This parody has gained a lot of popularity, the clip has already been viewed over 600,000 times and received about 40,000 “likes” on Facebook, and counting.

Adds co-creator Nick Ross: “The reaction of the video has been incredible…. We wanted [it] to be relatable and sad. While we were shooting, we would direct everyone with degrees of sadness. ‘Alright, now go to your level 8 sad and depressed… Great!’ It startled me how many times people on the crew would crack up at the actors looking sad and forlorn into the camera. It gave us hope for the video.”