G I R L Gets Us Ready for Summer 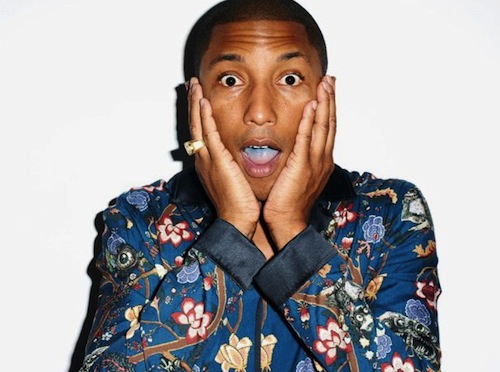 Pharrell is not a vampire, but he may be some sort of god. Coming off of the fantastic year he had in 2013, Pharrell is looking to keep that steam going with the release of his first solo album since 2006’s In My Mind with the release of G I R L, he isn’t trying to break any new ground on this album, but it is just another medium for Pharrell to hone his incredible producing skills and show the world why he is so important. Earlier in 2013, Pharrell scored the soundtrack for Despicable Me 2 and the highlight from the film was the super catchy pop song “Happy” later Pharrell continued his dedication to the song by filming a 24-hour long music video. The first single from G I R L, “Happy” makes everyone want to get up and dance. When you put in  G I R L, you are taken back to an age of music where it was about fun and getting up and dancing.

For Pharrell, making a pop record is not something that is foreign to him, producing hits like “Hot In Herre” by Nelly to “Cry Me a River” by Justin Timberlake to “Frontin’” by  Jay Z. The album starts off in a very non-Neptunes way, a full orchestra, in his first of many odes to women, “Marilyn Monroe” has Pharrell crooning in his unmistakable falsetto that has made him one of the biggest pop stars in the last year, and in the song he gets emotional. He opens up about a women that he loves and wants the world to know how much this woman means to him. The standouts on the record are “Hunter”, the Daft Punk collaboration “Gust of Wind” and “Come Get It Bae” with a guest verse from Miley Cyrus. In “Hunter”, Pharrell whips out one of the most ridiculous lines in a song that I can remember, “Duck dynasty’s cool and all, but they got nothing on a female’s call.” like it’s just so absurd that you laugh at the ridiculousness of the line, but if an up and coming singer would sing that line, people would jump at them and discredit their merit as a writer, but Pharrell makes such a dorky verse cool. The music on the song is a huge throwback to his Neptune’s tracks with a 70s sounding bouncy beat, but now he adds in the added layer of his high voice for a track that will have you up and dancing. As for the Daft Punk collaboration, Pharrell brings a sound to this record that really stands out, he slows it down a little, and adds everyone’s favorite French robots to really help take the song to the next level, it’s nothing like “Get Lucky” but it has such good energy and you can see that Pharrell is using this song to show how much he loves woman, or one girl in particular. Pharrell has said that this album is his way to honor women as a whole and let them know that they are worth something, and you hear that resonate in every song, with a strong support of the female sex. Finally, the great “Come Get It Bae” starts off simple with a guitar riff than evolves into something much funkier. Pharrell comes in with his distinct voice, and Miley comes in on the chorus, and brings such great contrast to the song that when its all put together it works so well.

Everything together this album just is so much fun, that it makes you want the summer so badly that you know most of these songs will be the soundtrack to like everyone’s summer. From the sound and results of this album, it looks like Pharrell will be dominating the radio once again this summer, and that is perfectly alright. We all could use a little more Pharrell in our lives, it just makes everything much more funky.