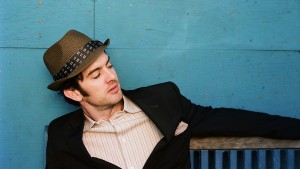 Fixin’ To Die is a collection of rearranged traditional songs, a classic cover, and a slew of G. Love originals, many simmering for over a decade, all sharing a common goal: to strip away all pretense and capture the original spirit and sound G. Love has cultivated over his entire career but never fully embraced until now. On his fourth Brushfire release, G. Love has left the hip-hop blues, a genre he has helped define, if for only a moment to make arguably his most sincere and candid record to date.

“It was an emotional recording session and I was truly blown away by the level of focus, care and passion Scott & Seth brought to it. We felt connected the entire time – it was instantaneous. It always feels like crunch time in the studio but it never felt like that with these guys. It was a team thing, no drama, no agenda. It was a tremendously positive and encouraging experience. This is the most inspired I’ve ever felt making a record – let’s just put it that way. I’m still buzzing about it,” says G. Love.

Produced and engineered in the inspiring sanctuary of Echo Mountain Studios in Asheville, North Carolina, the sessions underlying pulse is unabashedly, 100% pure and genuine country blues. From the ragged jangle of its opener “Milk & Sugar” and floorboard stomp of Bukka White’s “Fixin’ To Die,” over the loping lilt of “Home” and longing for “Katie Miss,” through the greasy fried “Get Goin’” and moonshine reverb of “Heaven,” to the hip shake hootenanny in Paul Simon’s infamous kiss off “50 Ways to Leave Your Lover,” G. Love and The Averts deliver a life lesson in how to find a song’s sweet spot.

The Apache Relay is releasing their second album, American Nomad, a modern and young roots-rock collection produced by Nielson Hubbard. Their debut 1988, was released in 2009, produced by Doug Williams best known for his authentically raw approach with the Avett Brothers. The record cracked the door to reveal the band’s capabilities, and Paste Magazine named it an “Auspicious Debut” and highlighted the band as “Best of What’s Next.” Since then, they’ve continued solid and non-stop touring, securing a fervent fan base for their jumping-up-and-down energetic shows.