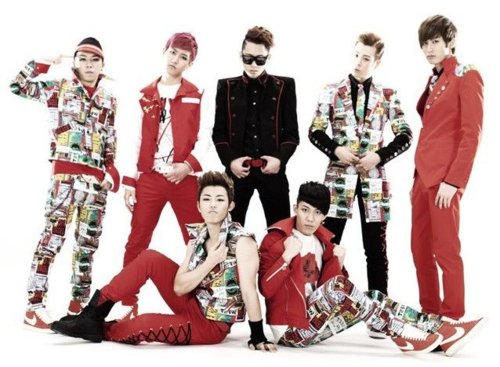 Happy #BLOCKtoBer everyone! Rookie Korean hip-hop group Block B is releasing their first full-length album on October 17th, according to allkpop.com. This is big news for the group and the fans, both of whom have had to deal with the infamous Thailand flood scandal back in February of this year.

Part of Block B’s allure is their playful attitude during interviews and performances. However, this became their downfall when incorrect translations led viewers to believe that the band was making light of something serious: namely, the floods in Thailand. In this video that was posted to YouTube, it appears that members Zico and Kyung are joking about the band only donating about $6 to help the victims in Thailand (which, of course, is not nearly enough to do anything for them). That combined with the kidding around that the guys did before the interview – one member sprawled out on a table for a picture – made the group appear insensitive.

The aftermath of the scandal, as reported by allkpop.com and seoulbeats.com, was far-reaching. There were articles stating that the group ruined Korea’s reputation with Thailand, fans were sending out death threats to the members’ families, and one member (P.O.) was even sent to the hospital to be treated for stress-induced mild schizophrenia. To atone for what had happened, the band’s leader (Zico) shaved his head – a sign of utmost remorse – and the group released an apology video. Subsequent performances were to be cancelled, but that was then reconsidered. The group’s production company, Stardom Entertainment, said that going on hiatus two weeks after their debut would kill their career. Stardom also stated that the group would have to show the public that they were planning to “[work] even harder than before.”

As a Block B fan, and as someone that’s watched the videos and read articles about the scandal, I’m really rooting for Block B to make an amazing album. They need prove to the world that just because they made a mistake, doesn’t mean that it’s the end of their career. Yes, there’s no doubt in my mind that Block B should’ve acted more professionally during the interview. At the same time though, I hope that they remember that they can still have fun during interviews (as long as the topic isn’t something serious). Hopefully this album will ease some of the stigma associated with the group and generate more positive conversation about their music. I, for one, can’t wait to see what they’re going to come up with.