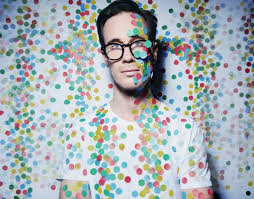 Sunny vibes flooded through the HUB Friday night as Hellogoodbye brightly tore through a set of indie pop gold. Presented by SPA, the band played an intimate yet electric show at Alumni Hall, maintaining a perfect balance between new songs and fan favorites.

Opener JD Eicher and the Goodnights warmed the audience up with their own blend of indie pop mixed with some classic covers. They led the crowd in singalongs of “Yellow” and “Won’t Back Down” all while intertwining original material into the set.

Then, Hellogoodbye took the stage and immediately began to rock the crowd with some happy uptempo jams from their record Would it Kill You? They followed that with an early hit called “Baby It’s Fact” from their debut album, acting as the first course for some longtime HG fans who were hungry to hear the songs they grew up with.

Two or three new songs were peppered into HG’s set, giving us a glimpse at the style of their new album. There is clearly a more electronic influence than the more organic sound of Would It Kill You? but the emotion and feeling is still there. The new album, entitled Everything is Debatable, which is available October 29th, could bridge the gap between older and newer fans who enjoy different aspects of their sound.

The band ended their set with an extremely emotional and beautifully executed version of “Oh, It is Love,” followed by an emphatic and booming “When We First Met.”

For their final endeavor, Hellogoodbye played a modernized rendition of “Here, in Your Arms,” which is perhaps the band’s most recognized song. The audience sang along to the nostalgic tune with Forrest’s vocals being heavily modulated to bring the song to a whole new level. The guys of Hellogoodbye played a great show.

If you missed them, be sure to catch them on tour this Fall with Paramore and Metric and definitely check out the new album, Everything is Debatable when it is released in late October.