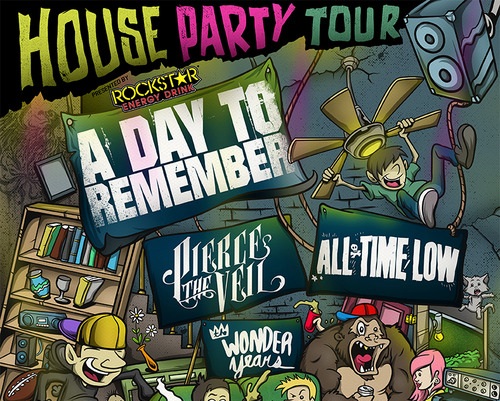 A Day to Remember recently kicked off their headlining House Party Tour in Broomfield, Colorado. The tour features  Pierce The Veil, All Time Low, and the most recent addition to the lineup, The Wonder Years.

Two of the featured bands, All Time Low and A Day to Remember, will be releasing new albums in the coming months. All Time Low is expected to release their newest album Don’t Panic: It’s Longer Now! on September 30th and, despite their ongoing conflict with Victory Records,  A Day to Remember’s much anticipated fifth album Common Courtesy is expected to drop on October 8th.

As exciting as it is for ADTR to be back on tour and to be releasing a highly anticipated new album, their issues with Victory Records still linger in our minds. After the many delays in releasing their fourth album, What Separates Me From You and the poor reviews it received from many diehard fans, we are all wondering, will the album be released on time; will it affect the House Party Tour; and the biggest question, will the new album be any good!? We will all keep our hopes up high and our heads down low.

To give fans a small taste of what the new album brings to the table, ADTR will be playing a few songs off of the new album on tour. Most recently, they played their new song “Dead and Buried” at the first stop on the House Party tour. This song exudes a classic ADTR sound and if the rest of the tracks on the album resemble this one in the least, ADTR fans should be very pleased.

The House Party Tour will be making stops in Pittsburgh and Bethlehem, PA as well as Trenton, NJ and Columbus, OH. Because of the anticipation of the new album releases, tickets for the tour are selling fast, with some venues already sold out. If you can’t live without hearing the new songs from ADTR and All Time Low first, then haste is in order if you expect to get tickets at all.